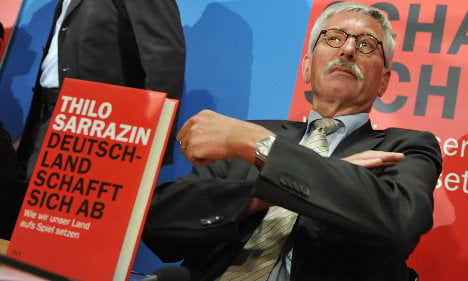 “I invite everyone to find discrepancies in my theories,” he said at a press conference. “It’s an uncomfortable discussion. But to solve problems we have to recognise them first.”

Sarrazin warns in his book that Germans could become “strangers in their own country” because of Muslim immigration. Excerpts published before the book’s release have sparked widespread outrage for being inflammatory and making unfounded generalisations.

But Sarrazin calmly renewed his broadsides against Muslims at the book presentation, while trying to deflect charges of overt racism.

“This isn’t about race, it’s about coming from Islamic cultures,” he said, adding that most Muslim immigrants were “hardly compatible” with a western society like Germany.

Such statements have led to a growing chorus of calls to kick Sarrazin out of the centre-left Social Democratic Party (SPD) and strip him of his Bundesbank post.

“This has been no easy decision for us,” Gabriel said.

Sarrazin had done a lot for the party but had now crossed a “red line,” Gabriel said, by linking the genetic make-up of certain ethnic groups with intelligence and the ability to learn. This was “highly problematic” and “racist.”

The SPD could no longer discuss these issues with Sarrazin, who had shown that “he is on completely the wrong track,” Gabriel said.

Gabriel also called on the Bundesbank to act. The SPD was confident there was now “no place” for the Sarrazin on the bank’s board.

The Bundesbank said in a statement on Monday evening that it would meet with Sarrazin “without delay” in order to discuss comments which the central bank deemed “discriminatory” and “provocative.”

The bank said it “decisively distanced itself” from Sarrazin’s views, adding: “The board declares that Dr. Sarrazin’s remarks are damaging to the reputation of the Bundesbank.” But only after hearing out Sarrazin would bank officials decide if they would take further action.

Senior SPD party members have previously said they would prefer that Sarrazin resign. But at his book launch Monday, he told reporters he had no plans to quit either the SPD or the Bundesbank board – saying he fully expected to be at the central bank a year from now, unless he suffered a heart attack.

Sarrazin also tried to distance himself from other European critics of Islam such as the Dutch far-right politician Geert Wilders.

“These questions belong in mainstream parties,” Sarrazin said, referring to immigration and integration matters. “There’s a tendency towards the extreme right (in Europe). I find that dangerous. But it’s also wrong simply to ignore such problems.”

Outside the launch, about 70 protestors gathered. The demonstration was organised by the group “Stop Right-Wing Populism!”

Pressure on Sarrazin has intensified in recent days, with with senior politicians including Chancellor Angela Merkel lining up to condemn his comments.

Merkel on Sunday evening weighed into the drama surrounding the central banker’s latest outburst in which he said different ethnic groups were each distinguished by an identifying gene, such as a “Jewish gene” or a “Basque gene.”

“The statements are completely unacceptable,” she told broadcaster ARD. “They are marginalizing … (they) disparage whole groups in the community.

“The type and manner of speaking here divides the community.”

Merkel also signalled that the Bundesbank should consider sacking Sarrazin.

“I’m completely certain that they will speak about this at the Bundesbank.”

Sarrazin told Welt am Sonntag newspaper: “All Jews share a certain gene; Basques have certain genes that differentiate them from others.” This followed a string of controversial remarks he has made about Muslims and integration in Germany.

Frank Bsirske, chairman of Germany’s largest union, Verdi, told daily Berliner Zeitung that Sarrazin had become an intolerable burden on an important public institution and therefore on the image of Germany as a whole. Sarrazin’s latest remarks were intellectually indefensible, particularly in light of Germany’s history, Bsirske said.

The Social Democrats’ general secretary Andrea Nahles said Sarrazin’s views had “drifted far from the values of social democracy and the consensus of our democracy.”

He has previously been sharply criticised by both Foreign Minister Guido Westerwelle and Defence Minister Karl Theodor zu Guttenberg.