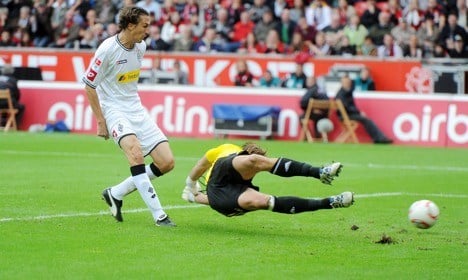 “‘Gladbach played very well,” admitted Heynckes. “We made a mess of our defensive organisation. We invited them to the party and they punished us.”

After Bayern Munich were beaten at Kaiserslautern on Friday, Wolfsburg allowed a 3-0 lead to slip to a 4-3 defeat by Mainz on Saturday as Schalke went down at home to Hanover on a bad weekend for the German league’s top teams.

Leverkusen fielded Germany star midfielder Michael Ballack – who was booed off when he was replaced in the second-half – as well as Adler and striker Stefan Kießling.

But they were out-played by ‘Gladbach as midfielder Patrick Herrmann netted twice for the guests which were both set up by Idrissou, who scored himself in the second-half.

“This is an extraordinary day for us,” said coach Michael Frontzeck. “We took everything possible from this game and everything worked out for us. But our objective will not change, we want to build on last season.”

On Sunday evening, Stuttgart’s poor start continued as they were well beaten 3-1 at home by Dortmund.

The visitors raced into a 3-0 lead after just 37 minutes as Christian Gross-coached Stuttgart suffered their second consecutive defeat.

“We played an outstanding first half. That was great football,” enthused Dortmund coach Jürgen Klopp.

It started when defender Marcel Schmelzer fired in a cross which deflected off Dutch defender Khalid Boulahrouz and into the net after five minutes. Striker Lucas Barrios and midfielder Mario Goetze then both netted before Germany striker Cacau pulled a consolation goal back on 69 minutes for Stuttgart, who are bottom of the table after two games.

“The way we played in the first-half, we had no spark at all,” said Cacau. “The goal and our fighting spirit came too late.”

Hoffenheim are joint early leaders with Kaiserslautern after Ghana defender Isaac Vorsah headed a late goal on Saturday that gave them a 1-0 win at newcomers St Pauli.

Wolfsburg playmaker Diego marked his return to the Bundesliga with a goal, but was unable to prevent his new side’s shock 4-3 defeat by Mainz as the home side threw away a 3-0 lead.

Last season’s runners-up Schalke were shocked 2-1 at home to Hanover, with defender Konstantin Rausch and striker Mohammed Abdellaoue scoring either side of half-time as the Royal Blues suffered their second consecutive defeat.

Peruvian Jose Paolo Guerrero netted in the 89th minute to seal the three points for Hamburg.

Bremen bounced back from their hammering on the opening day of the season against Hoffenheim when they beat Cologne 4-1, while Freiburg beat Nuremberg

2-1 after coming from behind thanks to two goals by Senegal striker Demba Cisse.

On Friday, champions Bayern Munich suffered a shock when they lost 2-0 at 10-man Kaiserslautern.

Bayern were beaten in only their second German league game of the season and were punished for a lethargic first-half performance, as Cologne claimed their second straight win.

Thomas Müller wasted a golden chance for the visitors in the first half and Kaiserslautern, last season’s second division champions, made Bayern pay through goals from Ivo Ilicevic and Srdjan Lakic.