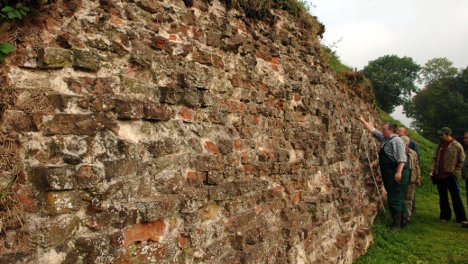 Records of such a gateway existed, but archaeologists were due Friday to announce they had found the actual site, news magazine Der Spiegel reported. The team described the find as a ”sensation.”

The discovery, near the town of Schleswig in Germany’s far north near the Danish border, reinforces the view that the Vikings were more than plunderers and pillagers, and that they also built and traded.

The gate was the only opening in the Danevirke – the 30-kilometre long wall that the feared men of the north built across the Cimbrian peninsula to separate their kingdom from what is now Germany.

The famous Nordic plunderers, who raided cities from Ireland to Spain were also prolific stone builders. The Danevirke is considered the largest archaeological site in northern Europe.

A team of archaeologists have excavated a three-metre thick section of the stone wall from the eighth century in the Haddeby district near Schleswig. Many of the stones are fist-sized but others are veritable boulders weighing 50 kilogrammes or more.

“The Vikings have gathered millions of stones,” archaeologist Astrid Tummuscheit told the magazine.

The scientist said they had found a single, a five-metre-wide door in the wall. According to chronicles, horses and wagons once poured through this gateway. It included a customs house with bawdy taverns and brothels.

For hundreds of years archaeologists had dreamed of finding this door between Denmark and the kingdom of Charlemagne, the Frankish king who built an empire that stretched across much of western and central Europe in the second half of the eighth century.

The existence of the fortifications were vaguely known. But archaeologists were prevented from digging at the site where they believed the gate stood because an old guesthouse, the Café Truberg, stood there.

When the guesthouse went broke, the Danish shipping magnate Arnold Mærsk swooped, buying the decrepit property. The German energy firm EON Hanse paid for the demolition of the guesthouse. Then the archaeologists moved in and quickly discovered the legendary door.

The Danes are equally excited by the discovery. Queen Margrethe II visited the excavation site along with Prince Frederik.

The Vikings were fighting at the time with neighbouring Slavs and Saxons for supremacy in the region.

“This was the Kosovo of the early Middle Ages,” Carnap-Bornheim told Der Spiegel.

Ultimately the Danes triumphed. Records show that in year 808 a King Göttrik decided “to protect his empire from Saxony with a wall.”