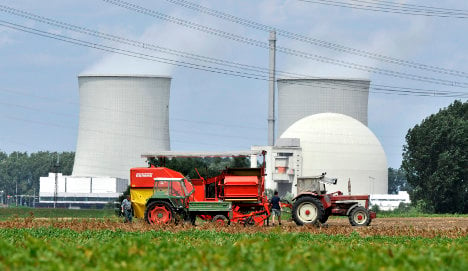 Daily Süddeutsche Zeitung reported on Friday that Merkel’s government was talking to nuclear power bosses – who have shown resistance to a compulsory levy to fund renewable energy – about having their firms enter into voluntary pacts instead.

In exchange, Berlin would abandon an obligatory surcharge that it was considering as part of a higher nuclear fuel tax, the paper reported, citing unnamed government sources. The higher fuel tax is a trade-off to which the industry is having to accede to extend the life spans of nuclear power plants.

The German government is already planning a €2.3 billion tax on nuclear fuel to help bolster the federal budget. But it has also discussed imposing additional burdens on the nuclear industry to fund green investment.

On Thursday, Merkel said during a visit to Lingen nuclear power plant in the northwest of the country that the government was “looking at the tax (on nuclear fuel) as a contribution to our goal of shoring up the budget.”

“In addition to that, we have to discuss how energy companies will contribute to the development of renewable energies,” she said, according to the AFP news agency.

Her remarks were expected to cause further resentment among energy companies which have already called for the scrapping of the planned tax on nuclear energy production of €2.3 billion per year. The controversial tax is to be discussed by the cabinet on September 1.

However, the new reports suggest Merkel is taking a gentler approach. Since July, Merkel’s conservative Christian Democrats and their coalition partners, the pro-business Free Democrats have been considering an additional charge on power companies in order to skim off some of the profits that the longer running time of nuclear power plants would bring.

The government is reportedly of the view that a triple burden on the firms from taxes, a renewable surcharge and stricter safety requirements would make individual nuclear reactors unprofitable. A voluntary contribution from the industry on green investment would be a clear alternative in the government’s eyes, Süddeutsche Zeitung reported.