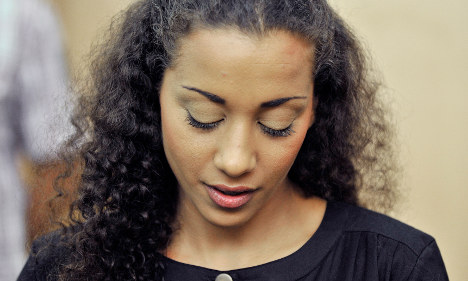 The court in Darmstadt, western Germany, convicted the 28-year-old member of girl group No Angels, on one count of grievous bodily harm and two counts of attempted bodily harm.

Presiding Judge Dennis Wacker also ordered her to do 300 hours of community service, saying the relatively light sentence was appropriate because she had “learned to be responsible and deal with her illness.”

Benaissa sighed deeply with relief when the verdict was read out and shortly afterwards began to sob. She cried for several minutes, hiding her eyes with her hands.

The singer had confessed to having unprotected sex and keeping her virus secret but denied intending to infect anyone during a trial that has sparked a media frenzy in Germany.

She had previously made an emotional apology during closing arguments, telling the court: “I am sorry from the bottom of my heart. I would love to turn back the clock, but I can’t.”

She said she had made an “enormous mistake.”

The charges against Benaissa could have led to up to 10 years behind bars, but both the prosecutors and the defence argued for a suspended sentence as she had admitted to the crime and said sorry.

Wacker said the sentence was relatively light because Benaissa was “aware of the mistakes she made and wanted to take responsibility for them.” The passing-on of the virus was “not intentional,” he ruled.

Benaissa’s lawyer Oliver Wallasch said: “I think we can be satisfied with the verdict.”

He explained his client’s emotional response by saying, “the tension was very high … but now she can breathe again.”

Medical experts determined during the trial she had almost certainly infected one of her ex-boyfriends with the HIV virus, as they both had a strain of the virus that is relatively rare in Germany.

The man, who was a plaintiff in the case, launched a bitter and scathing attack on the singer during the trial, accusing her of causing “a lot of suffering in this world.”

Benaissa found out she was HIV positive when she was 16 and three months pregnant and had endured a difficult youth up until that point, the court in Darmstadt heard.

She began to fall off the rails at the age of 12, fell in with the wrong crowd, and became an habitual user of soft drugs and alcohol, then a crack addict at the age of 14, living on the streets near Frankfurt station.

Discovering she was HIV positive and pregnant, she tried to turn her life around and appeared on a television talent show, during which she was chosen to form part of the group No Angels, which had a string of hits, mainly in central Europe.

Benaissa said doctors had told her the risk of transmitting the virus was “practically zero” and she did not want to jeopardise her success by revealing she was HIV positive.

When she was arrested in April 2009 just before performing at a gig in Frankfurt, the news was leaked to the press, sparking a media frenzy. The case prompted a debate about trial by media and presumption of innocence in a country that partly for historical reasons is highly sensitive about privacy.

The news magazine Der Spiegel described the trial as a “witch hunt” and AIDS organisations expressed their concern that HIV carriers would feel pressured to take sole responsibility for safe sex.

One group, AIDS help, slammed the verdict as giving the “wrong message” about dealing with the HIV virus.

“If the responsibility for prevention is placed only on women and those with HIV, we are not recognising that two people share this responsibility,” said Marianne Rademacher from the group.

Wacker, the judge, insisted that “only an open debate without prejudice can help to prevent such cases.”

In October, an authorised biography of the singer, who is rumoured to be leaving No Angels, is due to be released with the title: “Nadja Benaissa – Everything is going to be alright.”