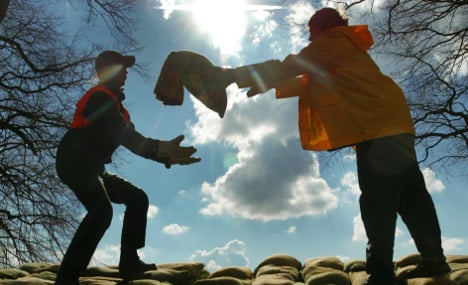 'Zivis' help build a dike during flooding in Saxony-Anhalt in 2006. Photo: DPA

If Defence Minister Karl-Theodor zu Guttenberg succeeds with his plans to end conscription, the so-called Zivildienst for young men who opted out of military service would also cease to exist.

But the prospect has worried German charity organisations, which fear they will not be able to make up for the loss of the free labour by some 90,000 Zivis, as the volunteers are known. Many of the Zivis work as caretakers in nursing homes and other social facilities.

In an interview with daily Rheinische Post he said he had questioned “whether we should legally establish the societal responsibility of a citizen.”

“It is not legitimate to require young people to make themselves available to the community for a limited time period?” he asked.

Outgoing Hessian state premier Roland Koch also suggested such a programme, but only for young men.

“The society will be poorer if young people are spared any kind of challenge to do something for their community,” he told daily Frankfurter Allgemeine Zeitung, calling it an “issue of upbringing.”

Meanwhile Family Minister Kristina Schröder, also a CDU member, has suggested a government-supported volunteer programme for 35,000 young people starting at age 16. Their service would last between six months to a year.