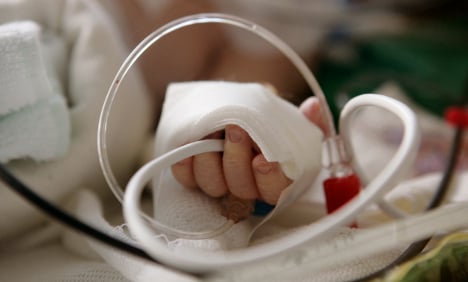 The third baby died on Monday evening at the intensive care unit at the Medical Centre of the Johannes Gutenberg University. It had been among the 11 children who received the feeding drips contaminated with intestinal bacteria.

Mainz senior public prosecutor Klaus-Peter Mieth said on Monday the deadly infections were likely caused by dirty tubing used for feeding the babies, though investigators are not sure whether it could have happened in the hospital pharmacy or in the clinic.

As authorities in the state of Rhineland-Palatinate continue to investigate how the contamination could have occurred, other facilities have reacted with thorough reviews of their own hygienic measures, according to a survey by news agency DPA.

“We are now even more careful,” said Dr. Georg Frey, medical director for the Prinzessin Margaret baby clinic in Darmstadt.

In the state of Thuringia hospitals have stopped using already prepared batches of baby feeding infusions until the cause of the Mainz tragedy has been fully explained, the state Health Ministry said.

Clinics in the southern state of Baden-Württemberg as well as Bremen, Frankfurt and Leipzig are taking similar precautions.

But some health authorities are waiting to find out the exact cause of the infant deaths before reacting. The hospital society in the northern state of Mecklenburg-Western Pomerania will institute necessary changes in its 38 hospitals as soon as this happens, leader Wolfgang Gagzow said.

Other clinics in the states of Hesse, Saxony-Anhalt and Saarland told DPA they were reviewing the preparation of such feeding drips step by step to root out any potential problems.

But some doctors also warned of panic.

“As long as we don’t know exactly was happened, we have nothing in hand to improve our own process,” said Thorsten Hoppe-Tichy, head of the Heidelberg University Hospital’s pharmacy.

Meanwhile newborn clinics in the eastern state of Brandenburg said that after thorough consideration, they had decided not to make any changes for the time being.

“Right now there is no reason to change anything,” Christian Heyde, pharmacy director for the Ruppiner Clinics in Neuruppin said.

“Where people are working there is always a danger that something could happen,” he said.