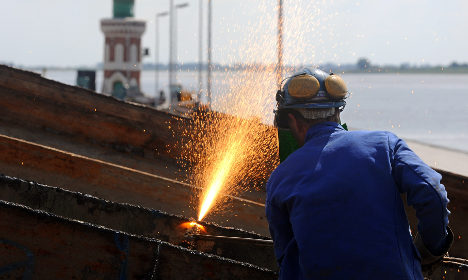 Stimulus measures have swollen public debt however, data from the national statistics office also showed, though it remains within striking distance of European Union targets.

Dynamic German activity contrasts with a loss of momentum in the United States, the world’s biggest economy, a slowdown in number two China and a fragile recovery in Japan.

The Destatis office confirmed a second quarter growth estimate of 2.2 percent from the previous three-month period, a record for reunified Germany, and noted that household consumption had contributed to the result.

On a 12-month basis, the economy expanded by 4.1 percent in the second quarter, Destatis said. Its data showed that domestic consumption gained 0.6 percent from the first quarter of 2010, but was 0.7 percent lower on an annual basis.

It was the first time in a year that consumer spending showed an increase, however, and could ease pressure on Germany, which has been criticised by some EU leaders for relying too much on exports to drive its economy.

“The rebound has affected the entire German economy,” which is now getting input from all sectors, Economy Minister Rainer Brüderle said in a statement.

Private and public consumption joined business investment and global trade in hauling Germany out of a record recession, though the country has not yet reached pre-crisis levels.

The latest data “means that much more (almost 60 percent) of the sharpest economic contraction in post-war history (minus 7.1 percent during the second quarter of 2008 to the first quarter of 2009) has been recouped by mid-2010 than previously expected,” said IHS Global Insight senior economist Timo Klein.

The German Chamber of Commerce and Industry (DIHK) has forecast full-year growth of 3.4 percent, higher than a revised 3.0 percent forecast issued by the German central bank and a rate that would see the economy tie the growth record it set in 2006.

In October, the government in Berlin will revise significantly higher its current 2010 growth forecast of 1.4 percent, officials have said, and unions are gearing up for tough wage talks now that growth is back on track.

Klaus Zimmermann, head of the DIW economic think-tank, told the German business daily Handelsblatt: “We must give a priority to temporary wage hikes owing to economic uncertainties abroad” rather than permanent increases that would raise labour costs and undermine Germany’s new-found competitiveness.

Despite the strong growth, Germany’s public deficit doubled in the first half of the year from the same period in 2009 to €42.8 billion ($54 billion), or 3.5 percent of gross domestic product (GDP), Destatis said.

That compares with the European Union’s Stability and Growth Pact limit of 3.0 percent, a level German officials are aiming for by 2012.

Government public spending rose by 0.4 percent in the second quarter, but Berlin will tighten its belt next year to meet a constitutionally mandated cut in its public deficit and debt.

“The pick-up in private consumption is an important sign that the German recovery is on the verge of becoming self-sustained,” ING senior economist Carsten Brzeski said.