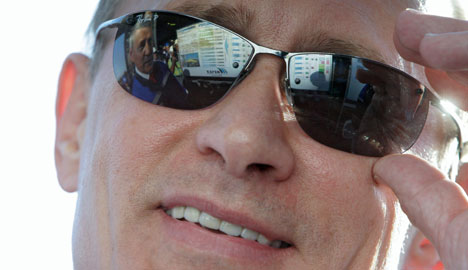 Putin, known for his tough-guy visits to his country’s most far-flung areas, went by helicopter to a Russian-German research station on an island at the mouth of the Lena River in the Far Eastern Yakutia region on the Arctic Ocean.

Wearing a black jacket to protect against the wind on the Samoilovsky Island off the settlement of Tiksi, Putin was shown ice said to be up to 3,000 years old and handled bones from a now extinct mammoth.

“Does climate change happen because the earth is breathing, living, giving off gas, methane, or is it due to the influence of human activity?” mused Putin as he sat down to tea with the scientists in their hut.

He noted that “10,000 years ago, the mammoths started to die out. This was linked to a warming of the climate, a rise in sea levels, a reduction of pastures.”

“All this happened without human influence,” he said in comments broadcast on state television.

Mammoths were huge woolly relatives of today’s elephants who lived in areas including present day Siberia until they started to become extinct in 10,000 BC, a process believed to have been caused by warming and human hunting.

Putin’s doubts would put him at odds with mainstream scientific opinion which backs the idea that man-made emissions are the prime driver behind the current warming of the earth.

In 2003 Putin amazed scientists when he speculated that a global warming by “two or three degrees” could be a good thing for Russia as its people would no longer need fur coats and its agricultural production could rise.

But a German scientist working at the station showed no fear in making her opinion clear to the Russian strongman.

“The burning of various kinds of fuel has a far greater effect on climate than these methane emissions,” said Inken Preuss quoted by Russian news agencies.

“Climate change has never happened like now and mankind is making a large impact,” she added.

Russia has long been criticised by environmentalists for its reluctance to accept radical carbon emissions cuts but Moscow maintains it cannot sacrifice economic development at a crucial moment in the country’s history.

However a massive heatwave has this year exacted a heavy toll on the country, with the agriculture industry losing an estimated billion dollars in a drought which has seen a quarter of crops destroyed.

Putin told the researchers that this year Russia has understood well the effects of climate change after its worst ever wildfires burned hundreds of thousands of hectares of forest.

But pointing out that the mammoths had fled to remote islands as the effects of climate change became more severe, he joked: “I’d like to know what is going to happen here in the near future and what islands we need to move to.”

Putin, a self-proclaimed wild animal lover, has in recent times enjoyed close encounters with a polar bear, a tiger and a leopard throughout Russia’s regions as he seeks to burnish his hard-man image.