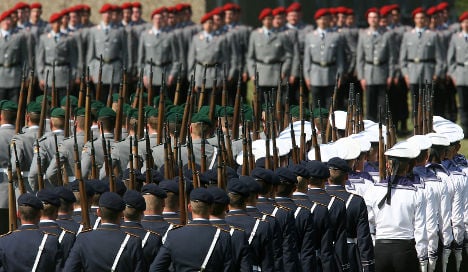 The defence minister announced his intention to cut troops numbers from 252,000 soldiers to 163,500 and effectively abolish conscription by mid-2011. Guttenberg said, however, that he intended to keep military service anchored in the German constitution.

“It’s incredibly important to me that we keep military conscription in the Basic Law,” he said. “I’m always amazed by those geniuses who know what the world will look like in the 20 or 30 years. I don’t and therefore believe we need the option of drafting young people if that becomes necessary.”

Since young men will no longer be called to compulsory military service, Guttenberg said he would instead push for a “trial” period of between 12 and 23 months, which would serve as a recruitment pool for men and women interested in joining the professional army.

Guttenberg said he wanted a smaller, more streamlined, efficient and modern Bundeswehr, which would actually be strengthened by increased competence.

But the two conservative parties in the coalition, Merkel’s Christian Democrats (CDU) and Guttenberg’s Bavarian sister party the (CSU), are at odds over ending conscription.

“I can only recall that our CDU has since 1955 always been the party of conscription,” he said. “It’s already known that I am a supporter of conscription.”

The state of Hesse’s outgoing premier and CDU member Roland Koch said: “We have very little financial means, but we must still anchor the Bundeswehr in our society.”

Chancellor Merkel plans to decide her stance after an intensive debate, her spokesman Steffen Seibert on Monday said, adding that she sees the discussion as a “starting point” for reform and supports “new thinking.”

Her cabinet’s current position is that the reform should save the country some €8.3 billion by 2014, though Merkel has since said this sum could be lowered.

The CDU and CSU party conventions in October and November are expected to be key in deciding on the final reforms.

Meanwhile Merkel’s junior coalition partners, the pro-business Free Democrats, are in favour of abolishing conscription, as are the opposition parties the Social Democrats, Greens and Left party.

But politicians will also have to address ways to handle the end of compulsory community service, or Zivildienst, which was the alternative for young men who opted out of military service.

Charity organisations have expressed deep misgivings about ending the programme for fear they will not be able to make up for the loss of the free labour. However, Family Minister Kristina Schröder said on Monday she planned to implement a voluntary Zivildienst for some 35,000 people.