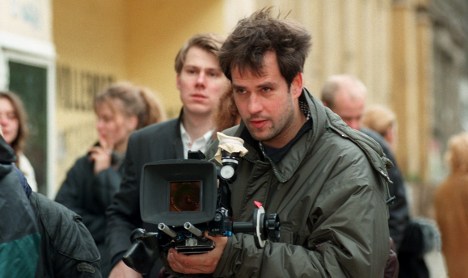 Videoing what he loved. Photo: DPA

Schlingensief, a director from Berlin’s Volksbuhne theatre, was due to present his latest production “S.M.A.S.H.” at the festival, but had cancelled the performances in July due to his illness.

Schlingensief, who would have been 50 this October, was known as the enfant terrible of German theatre and fearlessly attacked hot-button issues, provoking and probing the most sensitive social and political topics.

In 2000, in Vienna, where a far-right party had just joined the governing coalition, he set up a Big Brother type container in the centre of the city where real asylum seekers were to live – on the premise that they were being filmed and the public would get to vote them out of the ‘house’ – and the country.

This attracted a storm of publicity, with the website carrying images from inside and outside the container hacked by people of all political persuasions, and at one point a demonstration which stormed the container to free the people inside. It also provoked a discussion about the politics of asylum and deportation not only in Austria but across Europe.

In 2004, his operatic production of “Parsifal” at the Bayreuth festival, which honours Richard Wagner, drew the ire of some critics, including one who said the setting looked more like a refugee camp than a medieval castle.

On his website, biographer Till Briegleb called Schlingensief the “chief protagonist of his own art,” which is “a vehemently fought battle against hypocrisy using performance art, taboo violations and improvisation while stretching the limits.”