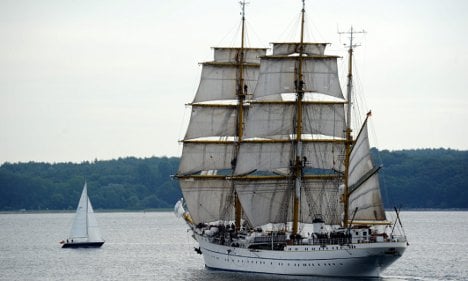 The tall ship left port in Kiel for a journey to South America expected to last until June 2011. More than 250 naval officer candidates will train aboard the vessel during a three-stage voyage totalling 23,000 nautical miles.

The ship, commissioned in 1958, will take part in celebrations for the 200th anniversary of the independence of Uruguay and Argentina. The crew will spend Christmas at sea and New Year’s Eve in the Uruguayan capital Montevideo.

The Gorch Fock will then navigate around the notoriously dangerous Cape Horn for the first time before sailing up the west coast of South America and through the Panama Canal. Once back in the Atlantic Ocean, the ship will return to Germany in time for the Kieler Woche sailing festival next summer.

Tall ship fans, however, will have one last chance to see the elegant barque in German waters before its long journey, as it will be the flagship for the “Sail Bremerhaven” event at the northern port city from August 25 to 30.