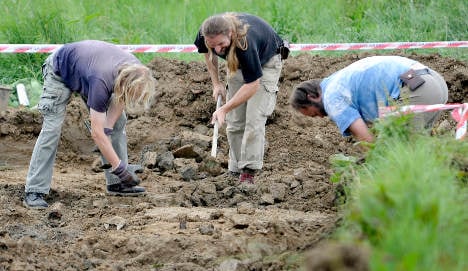 Investigator Michal Laska was quoted as telling Hospodarske Noviny that the remains of at least four individuals had so far been found at the burial pit uncovered last week in the central Czech village of Dobronin.

He said DNA from the remains was set to be compared with that of individuals now living in Germany, to help confirm the identity of the victims. The remains are believed to be those of a group of German-speaking farmers who lived in and around Dobronin, and who are thought to have been shot by a hit squad on May 19, 1945.

Laska noted that the names of the alleged perpetrators had been mentioned in a book about Dobronin by a German writer, as well as on several German websites.

“One of them is still alive,” Hospodarske Noviny quoted Laska as saying. “But to launch a formal criminal probe, we need proof. And after 65 years, there isn’t a lot. We can’t accuse a man of something simply because someone else says that he did it,” he said.

The farmers had been detained and were due to be expelled to Germany and Austria, as the Czechs drove out three million ethnic Germans in the wake of World War II as collective punishment for their perceived role in the conflict.

The country’s German minority was clustered in the Sudetenland, a region bordering Germany and Austria, which Nazi Germany took over in 1938 under the Munich Agreement with France, Britain and Italy.

Germany went on to seize the remainder of the country in 1939, launching a brutal occupation that only ended with the Nazis’ defeat six years later.