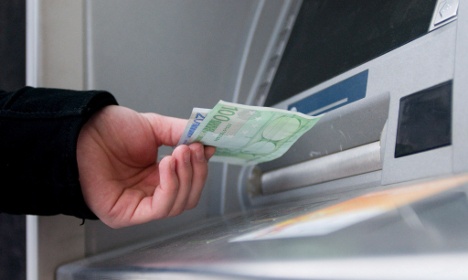 The country’s savings banks, credit unions and private banks are unlikely to present a common solution by the deadline set forth by the Federal Cartel Office, insiders told financial daily Handelsblatt.

The watchdog has for months been reviewing cash machine withdrawal fees, which average €5.64 but sometimes reach up to €10 in Germany, even though experts estimate each transaction costs the bank only €0.63.

These fees are high compared with other countries, particularly for customers using an ATM belonging to another bank with whom their own bank does not have a partnership.

In July the Federal Cartel Office formally rejected a €5 fee limit by the banking associations, telling them the amount was still too high.

According to Handelsblatt, the central credit committee (ZKA) plans to meet again on August 25, but experts aren’t expecting results.

“No one really believes that it will come to a collective position there,” a ZKA member told the paper.

Private banks want to cap ATM fees at €2, but savings banks and credit unions want no limits, saying that banks should only be required to inform customers how much they would be charged.

If the ZKA fails to come up with a new fee limit scheme, the Federal Cartel Office has threatened to investigate banks for anti-trust violations.