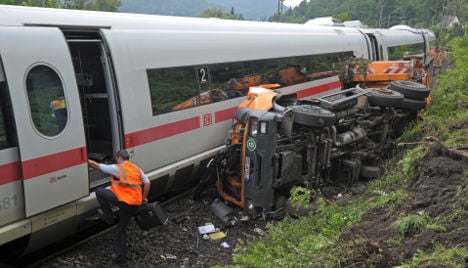 Federal police said one seriously injured passenger had to be flown by rescue helicopter to hospital, while nine others, including the drivers of both the train and the truck, were mildly injured, daily Bild reported.

The accident, in which two train carriages were derailed, happened near the town of Lambrecht around 10:15 am.

A federal police spokeswoman said early inquiries suggested the truck had rolled off a small dirt embankment next to a raised road that ran parallel to the train line. It came to rest on the train track.

The high-speed ICE train, unable to stop in time, ploughed into the truck.

A spokesman for rail operator Deutsche Bahn said the motor carriage at the front of the train, and the carriage behind it, both leapt off the track on impact, though the train didn’t tip over.

The carriages were being hoisted back onto the track by a crane, which usually takes several hours, the spokesman said.

The line between Lambrecht and the next town, Neustadt an der Weinstraße, were closed until further notice.

The passengers who weren’t hurt were taken by bus to Mannheim where a replacement train was organised to take them on to Paris.

ICE trains were being rerouted via Strasbourg. Regional trains between Neustadt and Lambrecht were being replaced by buses and taxis.