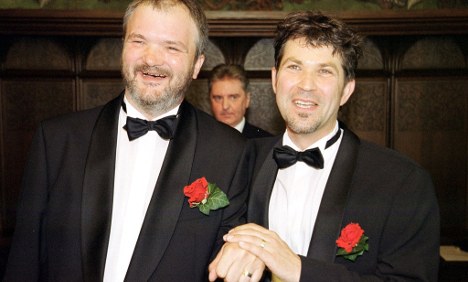 A file photo of a gay couple after their wedding in Germany. Photo: DPA

The unequal treatment of straight and gay partners when it comes to taxes and exemptions is unconstitutional, the court ruled.

The decision rendered relevant tax laws from between February 2001 and December 2008 invalid, and lawmakers have until the end of 2010 to create a legal framework to address the discrepancy retroactively.

“This is a good day for all homosexuals in Germany,” the Green party’s parliamentary group leader Volker Beck said after the ruling.

A 2008 inheritance tax reform recognised same-sex marriage, giving homosexuals equal rights to personal exemptions for inheriting the assets of their late partner. But registered life partners were still taxed at the highest level as distant relatives or strangers.

But the high court in Karlsruhe said the government’s 2010 annual tax law proposal should now reflect “total equality” for both same-sex and heterosexual life partners and spouses.

The case was brought to the court by two gay plaintiffs whose partners had died in August 2001 and February 2002.