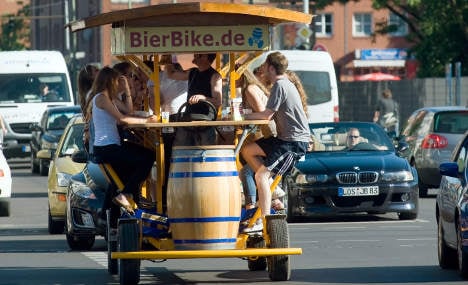 Pedestrians feel threatened by the two-wheeled Segways, while the wide, multi-seat conference bikes, often converted to “beer bikes” with a keg in the middle, create traffic jams on narrow streets, according to Berlin daily Der Tagesspiegel.

The beer bikes, which allow for passengers to imbibe while a sober driver guides them on their tour, are particularly controversial, the paper said.

The rolling keg parties have been visible on Berlin streets for some time, but were allowed to hit the southern city of Stuttgart’s streets just this summer following approval by the Baden-Württemberg state parliament.

Meanwhile the Rhineland city of Düsseldorf is concerned about the “indiscriminate peeing” and noise that accompanies the beer bike tours. The municipal public order office there tried to have the vehicles banned last year with a successful case in the city’s administrative court, but failed to convince an appeals court.

The state’s top administrative court in Münster will now address the case in October, and the nearby city of Cologne plans to model their regulations accordingly, the paper said.

Officials in the German capital have also decided to wait for that ruling.

“Then we’ll discuss it,” Mathias Gille, spokesperson for the Berlin city government’s traffic control office, told the paper. “There are no motions to ban them. The beer bikes and rickshaws are not to be overlooked, though.”

But deputy leader of the Berlin Free Democrats, Klaus-Peter von Lüdeke, told Der Tagesspiegel that he wants the vehicles banned.

“These rolling beer bars take up the width of a car and are real traffic impediments,” he said.

Beer bike drivers are required to remain sober while they guide the tours, but Lüdeke said they still could not be trusted to negotiate traffic.

But Green party state parliamentarian and member of the committee for traffic and development Claudia Hämmerling rejected a ban on the vehicles.

“There’s also a danger from regular bike riders,” she told the paper.