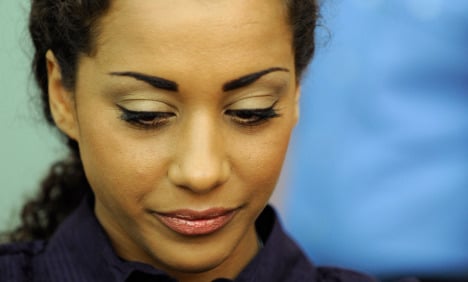 The 28-year-old admitted she had intercourse on five occasions between 2000 and 2004 with three different partners, but did not tell them she had the virus that causes AIDS despite knowing about her infection since 1999.

“I am deeply sorry,” the mother-of-one said, adding that she had been “absolutely careless” in her behaviour during those years and is now willing to accept legal consequences.

Benaissa, who has admitted to being addicted to crack cocaine at age 14, discovered her HIV status when she became pregnant at 16 in 1999.

The Hessian court also plans to review whether the singer in the all-female pop group infected one of the men with the virus. Because the incidents in question occurred when the defendant was in her teens, the trial is being addressed by a youth court. A verdict is expected on August 26.

A conviction for bodily harm can lead to a sentence of three months to 10 years in prison.

On April 11, 2009, Benaissa was arrested in front of fans just ahead of a performance at a Frankfurt night club. She was jailed on remand for 10 days and only after her arrest was it made public that she was HIV positive.

One of the unnamed plaintiffs told the court he had found out about Benaissa’s infection from her aunt and went to his doctor for a blood test straight away.

“A few hours later the doctor rang and told me to come over. I went to pick up the results with my brother,” and found out he was infected, he told the court.

“You have created a lot of suffering in the world,” he told the singer.

In a television interview in July 2009 the singer talked about living with being HIV positive.

“I can’t just go anywhere I like and be free and be a normal person. I now have this stamp. I will do my best to make the most of it,” she said.

“I am actually completely healthy, not sick. I am HIV positive. Being HIV positive doesn’t mean being ill. If the disease breaks out it is called AIDS. I have a completely normal life expectancy.”

In October an authorised biography of the the singer, who is rumoured to be considering leaving No Angels, is due to be released with the title, “Nadja Benaissa – Everything is going to be alright.”

No Angels shot to fame in 2000 thanks to a television casting show and had a string of hits in central Europe before splitting up in 2003. They reformed in 2007 and competed in the 2008 Eurovision Song Contest, finishing a lowly 23rd place.