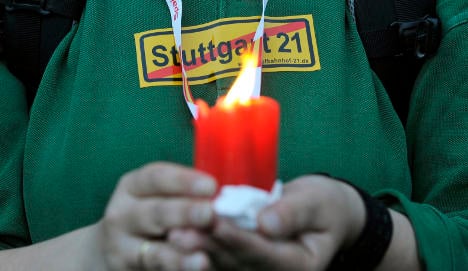 This €4.1 billion rebuilding project involving the historic Stuttgart central station attracted tens of thousands of protesters over the weekend.

Now it is claimed in Der Spiegel magazine that the state of Baden-Württemberg agreed to pay for ten years of not-yet-finished railways in order to plug a hole in Deutsche Bahn’s finances – so it could continue with the Stuttgart 21 plan.

A report written in 1999 revealed the 344 million Deutsche marks (around €172 million) gap in the financing for the project, Der Spiegel reported. Yet it was seen as crucial for the project to go ahead, joining the station to a 32-km tunnel as well as a new connection to Ulm.

But it could only be financed if Baden-Württemberg agreed to finance new regional rail traffic, some of which would only be used after completion of the Stuttgart 21 project.

The magazine quoted from the draft contract between Deutsche Bahn and Baden-Württemberg which specifies that the state would, in 2001, order the provision of 1.45 million train-kilometres which would be introduced after the completion of Stuttgart 21.

This would cost around seven euros a kilometre, amounting to around €10 million. An order for new trains to the amount of DM200 million (€100m) came on top of this. The contract was slightly altered in 2001 and signed, and is valid until 2016, the magazine reported.

Deutsche Bahn has said there was no immediate connection between the contract and Stuttgart 21, adding that such a deal would be illegal.

Baden-Württemberg has admitted a connection between the orders placed with Deutsche Bahn and Stuttgart 21, but said that it was not only done in order to improve the economic viability of the project.

A spokesman for the Baden-Württemberg state Transport Ministry said the agreement was discussed openly and intensively at the time and it was considered a good idea to kill two birds with one stone – to increase rail transport in the state as well improve the economic viability of the Stuttgart 21 project.

The then Baden-Württemberg state Transport Minister Ulrich Müller has rejected any improper connection between the two factors, being quoted in Der Spiegel saying he got what was best for the state.

A state spokesman said that Müller’s deputy at the time Stefan Mappus, who is now state premier, had little to do with the deal, only taking part in the final negotiations, not the months-long preparatory discussions.