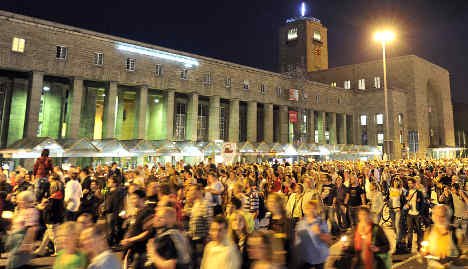 The number of people who took part was twice as many as had been predicted, presumably prompted to take to the streets by the actual start of demolition, said Matthias von Herrmann, organiser of the demonstrations against the Stuttgart 21 project.

“If it continues like this, the whole city will be in uproar before long,” he said. Politicians had thrown oil on the fire by ignoring previous protests by thousands of people, he said.

‘Polling day – pay day’, those in front of the station had chanted, threatening political retribution at next March’s state election for the decision to go ahead with the project which has become enormously controversial.

Costing €4.1 billion, the demolition and construction will tear up the city centre for more than a decade and demolish parts of the landmark train station built by architect Paul Bonatz in 1928. But its supporters argue it will make the city an important rail link between Eastern and Western Europe.

A ‘test’ sit-in blockade is planned for Saturday, to see how much disruption could be caused to demolition work should it be repeated, with organisers expecting several hundred, if not more, people to take part.

Police reported the demonstration and march on Friday went off without any problems, although four people were carried away having entered the works site to try to stop the start of demolition that morning.