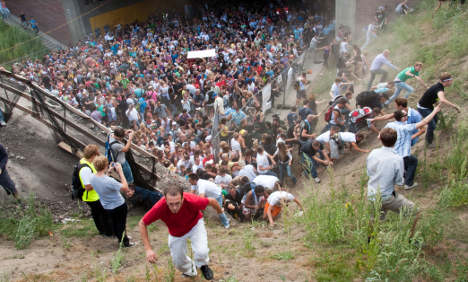 Ralf Jäger, the western German state’s interior minister, has said that organiser Lopavent was solely responsible for the poor crowd control that led to 21 deaths and left more than 500 people injured in the city of Duisburg last month.

But as investigators continue working to clarify just how things could have gone so wrong, news magazine Der Spiegel on Thursday cited a classified internal police document that casts doubt on Jäger’s claims.

According to the magazine, the document reveals some 2,900 officers had been tasked with much more than managing pickpockets and fistfights at the techno music festival. Their three areas included “protection of the event,” clarifying “numbers, movement, behaviour and atmosphere” among participants, and supporting organisers “according to situation,” in particular to “guarantee secure and controlled entry/exit to/from the event grounds.”

Furthermore, the officers were asked to work closely with private security workers to prevent partiers from climbing fences and other barriers – which was precisely one of the things that led to the catastrophe, the magazine said.

As overcrowding in and around the event’s only entry, a narrow tunnel, became increasingly uncomfortable, video surveillance from around 4:17 pm shows a couple managing to climb a barrier fence and escape, sending the masses into a panic as they tried to follow their lead.

The eerily prescient July 19 document from Duisburg police president Detlef von Schmeling also reveals that the city was aware of the possibility that “significantly higher numbers” than the approved 250,000 visitors would descend on the Ruhr Valley city. Officials have since estimated that more than one million could have been present. He also wrote that this could result in “emotional reaction by visitors” and create “pressure at the entry to the event grounds” and even a “traffic build-up” at the tunnel, the magazine said.

Still the state Interior Ministry on Thursday stuck to its initial claim that ultimate responsibility for event security remained with the organisers, and that securing paths and fences were “secondary responsibilities” in an emergency.

This unfortunately became the case when organisers could no longer handle the crowd, a spokesperson said.