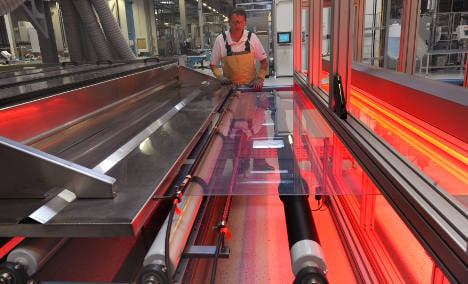 The strong figures they await will be even more notable as fears grow that the United States and now China, the Asian powerhouse, are showing distinct signs of slowing, raising questions about the overall recovery.

As Europe’s biggest economy, and the number two exporter worldwide after China, Germany thundered ahead in the second quarter of 2010 and might surpass growth of 1.8 percent posted in the first three months of 1992.

“Even more important, however, whether growth is at 1.3 percent on the quarter or 2.0 percent is the fact that the growth momentum seems to be holding up well in the third quarter,” Goldman Sachs economist Dirk Schumacher noted.

Last week, European Central Bank president Jean-Claude Trichet said: “We consider that both the second quarter and probably the third quarter are likely to be better than we had anticipated” for the full 16-nation eurozone.

Schumacher highlighted German job prospects as “the most important bit of information in that respect as it clearly shows that companies believe that this is a genuine recovery.”

Though German unemployment inched up to 7.6 percent last month, Economy Minister Rainer Brüderle has forecast the number of jobless will soon drop to less than three million.

A state-subsidised programme that let firms cut workers’ hours during the downturn has kept unemployment from spiking, something that could support consumption in coming months.

While an export surge pushed the German trade surplus up to €14.1 billion in June, imports leapt to €72.4 billion, an all-time record since figures were first compiled in 1950.

In France, the second biggest eurozone economy, official data due Friday are expected to show a smaller rebound in activity but this might still be enough for Paris to reach its full-year target of 1.4 percent.

That is also Berlin’s official forecast, but it will probably be raised after a central bank estimate was revised higher to 1.9 percent in June.

German inflation could come in at a tame 1.2 percent this year, added Germany’s central bank, the Bundesbank, a level seen already in May and July.

The change of fortunes from 2009 is due in large part to the fact that Germany has become more competitive and its machine tools, autos and chemicals are highly valued worldwide.

German workers who made wage sacrifices to preserve their jobs as the economy contracted by 4.9 percent last year are letting it be known that payback is now in order, however.

Second-quarter growth will compare with a gain of 0.4 percent in the same period a year earlier, the first quarterly rise after a year-long recession.

In the first three months of 2010, German economic activity expanded 0.2 percent, the same rate as at the end of 2009.