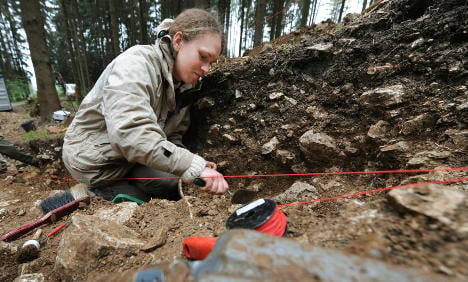 A 2009 image of a student at the Oldenrode dig. Photo: DPA

Scientists had been combing over the Roman battlefield, discovered near Oldenrode in late 2008, for more clues about a battle with Germanic tribes they have pinned around the year 230 AD.

They have already found more than 1,000 artefacts in the area with metal detectors, but were surprised when they turned up a live hand grenade and an anti-tank grenade – both believed to be from World War II, Kalefel-Oldenrode Mayor Edgar Martin said Thursday.

Local explosives experts detonated the bombs, and are now searching for further unexploded ordnance that may be nearby, Martin said.

The archaeologists at the site initially feared they would have to suspend the dig due to safety concerns, but they will now press on with the accompaniment of munitions experts, he added.

Meanwhile visitors to the wooded area will only be allowed to tread on designated areas.

When archaeologists discovered the third-century battlefield in 2008 they said it would rewrite history. Until then historians had believed that the battle of the Teutoburg Forest, which took place in 9 AD, resulted in the Roman’s Empire withdrawal from Germania without any further attempt to conquer the land beyond the Rhine River. But the unearthing of the battlefield proves that Rome didn’t give up its expansionary ambitions until much later than previously assumed.

And more than 60 years after the end of World War II, weapons recovery remains an important task for police throughout Germany. Allied forces dropped more than 2.7 million tonnes of explosives across Germany during the war. Some of the ordnance did not explode and has become increasingly dangerous with time and corrosion.

In June of this year three members of an experienced bomb squad were killed and two seriously injured in Göttingen – not far from the Oldenrode battlefield – when a 500-kilogramme bomb they were trying to defuse exploded.