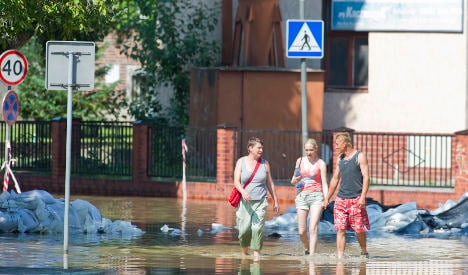 Residents get their feet wet in the town of Gubin. Photo: DPA

Clean-up operations were underway, meanwhile, in the neighbouring state of Saxony, which was severely affected by the flooding at the weekend.

Water levels on the flooded Neiße and Spree rivers in Brandenburg were sinking and evacuations were put on hold.

But warnings were still in place for many parts, including the city of Cottbus, southeast of Berlin. It was critical for Cottbus that the flood waters did not swell, said Matthias Freude, the head of Brandenburg’s state environment office. This remained a “very sensitive issue,” Freude said.

The highest water levels around Cottbus were expected on Tuesday afternoon.

On a brighter note, Freude added: “For the Spree, I think all the major problems have been resolved.”

On the Spremberg dam, which has played a key role in coping with the Spree flood waters, everything was going to plan, with high waters being channelled successfully to the north.

But Brandenburg premier Matthias Platzeck warned: “We must not let the damns fill up because rain has been forecast.”

The situation around Guben in Brandenburg remained tense. Around midday the water level reached 6.27 metres but peaked there. Streets were flooded and a highway blocked. About 180 people who had been forced to leave their homes in the town of Klein Bademeusel were able to return Tuesday.

To the south of Guben, residents of the town of Grießen had a stroke of luck: the dike broke but the small town was not flooded.

In Saxony, meanwhile, things were returning to comparative normality. The UNESCO heritage-listed Fürst Pückler Park in Bad Muskau, on the Neiße River, was completely flooded, but damage turned out to be limited.

In the region of Görlitz, the flood warnings had finished and Saxony’s Finance Ministry announced that about €1 million would immediately be made available to fix damaged roads. The first clean-up operations had also begun.