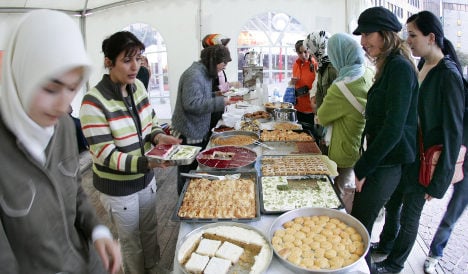 Muslims and non-Muslims after the end of Ramadan fasting in Essen. Photo:DPA

“You can theorise all you like about integration, but we wanted to send a clear signal,” Carsten Molings, head of marketing at the channel, said in a statement.

“RTL2 makes programmes for all people and followers of all religions. Just as every year we reflect Christmas and Easter in our programming, we wanted to do the same for Ramadan.”

Muslims observing Ramadan fast between sunrise and sunset, meaning in Europe nothing can pass their lips for up to 16 hours. RTL2 will show a message on the screen at these times.

The holy month was expected to start on Wednesday throughout much of the world or a day later, depending on the sighting of the crescent moon the night before.

“This shows how successful integration is in this country,” ZMD general secretary Aiman Mazyek said in a statement. “Actions like this are an example to all.”