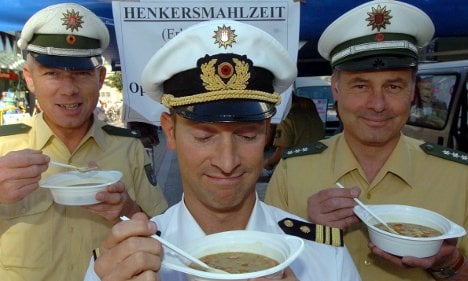 “For some time already we have been observing an increase in the rotten or expired food given to our colleagues on duty,” state union leader Frank Richter said in a statement.

But the worst of food fouls came at a friendly football game between Borussia Dortmund and Manchester City, where officers were given pre-packed lunches that had blood stains on the packaging, the GdP said. This was the “pinnacle of the intolerableness,” the statement added.

“I expect immediate and appropriate crisis management from the Interior Ministry,” Richter went on, suggesting that the authority should sack the catering company responsible for delivering the bad food.

The privatisation of police force kitchens should also be turned back as quickly as possible, the statement said.

“The privatisation of police catering did not lead to the promised cost reductions, but instead to the opposite,” Richter added. “Our colleagues are treated worse and the taxpayer pays more for that.”

Though the GdP reportedly complained about the problem already in June, a spokesperson for the state office for central police services told daily Bild that they had not heard of the food complaints.