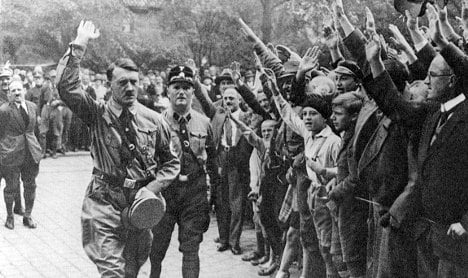 The court in Oldenburg, west of Bremen, ruled that Nazi expressions had to be banished from public spaces, regardless of whether there was any real political motive behind them.

The man had previously been sentenced to two months’ prison by an administrative court in the town of Leer, however this was overturned by a regional court in Aurich on the grounds that there had been no political meaning to the man’s gestures.

But the higher court in Oldenburg disagreed. The judges argued that any display of Nazi symbols or gestures had to be illegal in order to banish them completely from the public sphere. It did not matter, therefore, whether or not the drunk, homeless man had a solid political basis for his behaviour.

The Hitler salute, consisting of a raised right arm and open hand, is banned in public in Germany, as are most Nazi expressions and symbols, including swastikas and using phrases such as “Heil Hitler.” Breaches are punishable by up to three years’ jail.

Ironic uses can, however, be exempt, though this has led to legal controversies over what constitutes irony. Prince Ernst August of Hannover, husband of Caroline of Monaco, escaped punishment despite giving an airport official an “ironic” Nazi salute at Hannover airport in 2005.

In 2007, a 58-year-old Berlin man, Roland T., was sentenced to five months’ jail for teaching his pet dog, Adolf, to raise its paw in a Hitler salute. The man had previously been investigated for Nazi-style displays but authorities had been lenient because he had a brain injury.

Also in 2007, a court sentenced Horst Mahler, former leftist radical-turned-neo-Nazi, to six months’ prison for what he claimed was an ironic Hitler salute to a Jewish television interviewer.