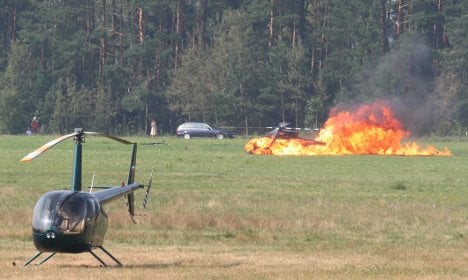 The pilot, Gunter Zimmer, 74, was making “death loops” in his MD 500 helicopter when it crashed and burst into flames at the Borovaya airfield, which was hosting a Commonwealth of Independent States sport helicopter competition.

According to authorities in Minsk the aircraft went down just a few hundred metres from the crowd of spectators right after the competition began. The crowd reportedly fled the competition grounds in a panic.

The cause of the crash was not immediately known, but experts said they could not rule out that the experienced pilot from Dinslaken, North Rhine-Westphalia may have made a mistake or suffered from a health problem that lead to the accident.

Zimmer had been a long-time member of the ODM German national helicopter pilot’s team.