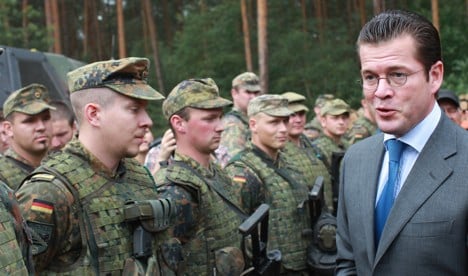 A new Emnid opinion poll, commissioned by the Bild am Sonntag newspaper says that 63 percent of Germans support an end to compulsory national service.

Even 58 percent of Christian Democratic Union (CDU) voters – the party most keen to hang on to conscription – agree that military service is out of date. Only 33 percent of Germans would like to see it continue.

An end to military service would also mean an end to civilian national service, where young men spend six months as carers or working in hospitals. Despite concerns about a shortfall in the workforce, the German association for conscientious objectors (KDV) says ending conscription would have little or no effect on the supply of workers in these institutions.

Defence Minister Guttenberg, of the Christian Social Union (CSU), wants to reform Germany’s military, getting rid of conscription mainly because of its expense and its lack of military use. The opposition Social Democratic Party has already said it would support the measure.

But there is still much resistance to the idea within the CSU and its sister party the CDU. The state premier of Lower Saxony David McAllister said conscription was a core principle of his centre-right party, and it promoted the exchange of civilian society and the military.

Germany is one of the last European countries to still have conscription.