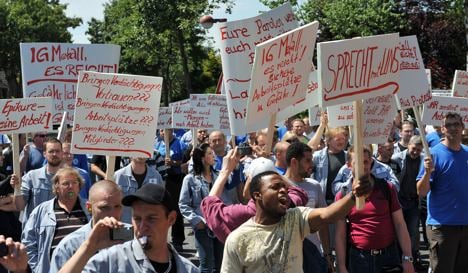 Heavily dependent on exporting quality German-made products, the economy, Europe’s biggest, was hit harder than most by the global crisis but now appears to be recovering faster as demand across the globe picks up.

Foreign orders are booming, the country’s low unemployment has been hailed as a “jobs miracle,” top firms are reporting strong profits and consumer and business confidence levels are soaring.

And having contributed, they say, to this performance by not pushing for pay rises during the tough times, trade unions want a slice of the pie now the recovery is setting in.

“In this first wage round after the crisis, we want to ensure employees get their fair share of the upswing,” Berthold Huber, head of IG Metall, one of Europe’s biggest unions, wrote in the Rheinischer Merkur daily. “That is good for the employees, good for the economy and secures jobs.”

“We want our part of the recovery,” said Oliver Burkhard, another senior official from IG Metall, which represents more than two million workers in the steel and metalworking industry. The unions have German public opinion and many economists on their side.

A recent poll for ARD television showed that seven in 10 Germans thought union demands for a three-percent pay rise was “appropriate.”

Peter Bofinger, one of the “five wise men” that advise Chancellor Angela Merkel on economic policy, called for a “strong increase in wages of at least three percent” saying it would boost Germany’s sluggish domestic demand.

Unions have been “unbelievably responsible” in the past two or three years, which has enabled Germany to overcome the global slump better than many of its European neighbours, Seehofer said.

Fearing mass lay-offs amid plunging growth, IG Metall agreed in February a two-year deal with a pay freeze and a one-off payment in 2010 followed by a 2.7 percent hike next year.

On the other side of the negotiating table, employers’ federation head Dieter Hundt warned it was “premature” to talk of wage hikes as the German economy is not yet completely out of the woods.

Some also caution that the unions’ change of strategy could lead to German inflation taking off and eventually to European Central Bank interest rates climbing off their record low levels.

“German inflation slumbers but the alarm has been set,” Commerzbank economist Eckart Tuchtfeld wrote Friday in a research note about German wage policy.

But the Financial Times Deutschland said bosses should not fear increased union pay demands as labour leaders have shown they can be responsible when times are tough.

“For unions to demand massive wage increases in light of the DAX (stock market) … would of course be ridiculous, as the upswing is still too fresh and risky,” the newspaper wrote in a recent editorial.

“But companies should not fear moderate demands, as unions have actually in recent years demonstrated that they are more sensible than some have claimed.”

Nevertheless, Hundt warned that workers should wait until the upswing has fully taken hold before expecting a share of the proceeds. “We must not put the current recovery at risk,” he told German radio. “It’s still not yet time to start partying.”