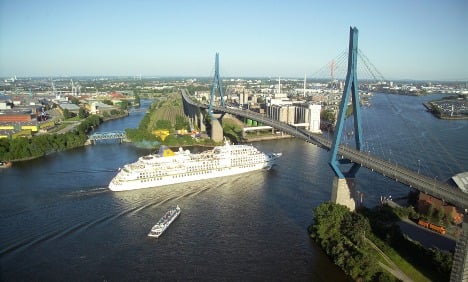 The Köhlbrandbrücke on a sunny day in Hamburg. Photo: DPA

It remains unclear how the large American aerial bomb wound up in a pile of metal scrap at the recycling centre just 800 metres from the heavily trafficked Köhlbrandbrücke, a fire department spokesperson said.

Experts from the city’s ordnance disposal unit planned to defuse the bomb in late afternoon, but first had to evacuate the surrounding 300-metre area and create a 1,000-metre warning area where residents and workers were instructed to remain indoors during the operation.

About 100 people were evacuated in the industrial area, while the bridge and two harbour docks were also due to be closed.

In June of this year three members of an experienced bomb squad were killed and two seriously injured in Göttingen when a 500-kilogramme bomb they were trying to defuse exploded. In 1994, three construction workers were killed and eight bystanders injured when an unexpected bomb detonated, tearing through nearby buildings and cars in Berlin. In 2006, a road worker was killed near Frankfurt when his excavator hit a bomb.