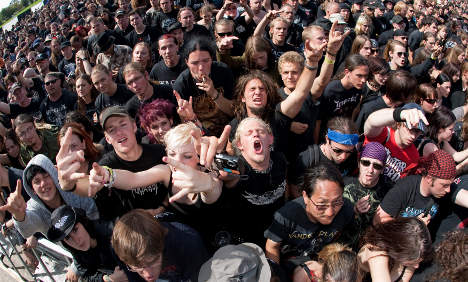 Tickets for the three-day event – billed as the world’s largest heavy metal festival – have been sold out for months. More than one-third come from abroad for the show, also known as W:O:A.

More than 100 bands will play under the motto “Louder than Hell,” and headliners include rock legends Alice Cooper, Iron Maiden, Slayer and Mötley Crüe. Six stages will accommodate the many bands playing across the 140-hectare festival grounds in the state of Schleswig-Holstein.

Click here to rock on with The Local’s 2009 Wacken gallery.

But on Wednesday evening the event was inaugurated with a low-key performance by the Wacken fire fighters’ band, who entertained a group of long-haired metalheads with a flourish of trumpets and old-fashioned biergarten music – a tradition that started in the tiny town in 2005.

With beer glasses in hand, the sweaty fans reportedly let their hair fly as they banged their heads rhythmically to the Oom-pah beat.