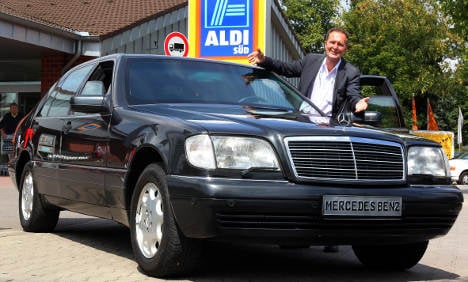 After undergoing a 17-day kidnapping ordeal in 1971, Albrecht apparently opted to put security over luxury while on the road.

The dark Mercedes S-Class vehicle is inconspicuous. The seats are the simplest choice offered by the carmaker, as is the radio with a basic cassette player. But the windows are so dark it’s hard to tell if anyone is at the wheel and at 6.5-centimetres thick are enough to deflect a rocket-propelled grenade. The floor panel is made of tank-grade steel and the tyres are also bullet-proof.

Further safety measures by the shy billionaire included a special oxygen system in case of a poison attack and an intercom that can pick up voices from 30 metres away. The car boot features a hidden phone in case kidnappers ever put their victim there, while all four doors are programmed to detonate explosives at the push of a button.

“He clearly had a lot of fear,” Fröhlich said.

The car cost an estimated 1.5 million Deutsche marks when Albrecht bought it in 1996. With 174,000 kilometres on it, the current price tag is a mere €100,000. A Moscow wine dealer has reportedly already signalled an interest in buying.

But with all of its added components, the armoured car weighs some 3.5 tonnes and isn’t a very smooth ride.

“It drives sluggishly like a loaded truck,” Fröhlich said.

The quiet joint creator of the international supermarket chain with estimated annual sales of €50 billion died July 24 in the western German city of Essen after a long illness. He was the second wealthiest man in Germany, after his equally reclusive brother Karl.

Theo Albrecht amassed a fortune estimated at €16.75 billion. The Albrecht brothers earned their money with their ultra-discount grocery chain, which is short for “Albrecht discount.” After they started in the 1960s they later expanded into nearly 20 countries. They divided German operations, with Theo in charge of the north and Karl running stores in the south.

But after handing over a ransom of seven million marks (about €3.5 million), Theo was almost never seen in public.

He is survived by his brother and by children, but as with his other biographical details, it is unclear how many.