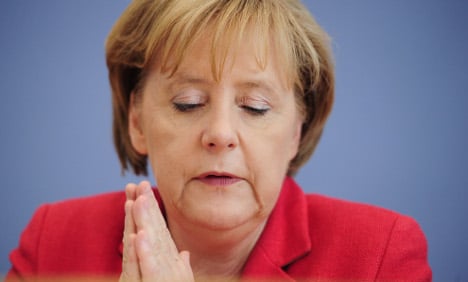 The poll, published by Stern magazine and broadcaster RTL, put Merkel’s ruling Christian Democrats (CDU), combined with their Bavarian sister party the Christian Social Union (CSU), at 30 percent – up just one percentage point from the last tally. Their junior coalition partners, the pro-business Free Democrats (FDP) also picked up a point but are still mired at just 5 percent.

With a combined 35 percent, the coalition finds itself 13 points below its September 2009 election result. Last week’s poll showed the three governing parties scraping together their weakest support since the survey began in 1986.

Meanwhile the centre-left Social Democrats maintained their year-high of 28 percent for the fourth week in a row, while the socialist Left party garnered 11 percent. The environmentalist Greens lost one point to reach 18 percent.

Were an election to be held soon, the Social Democrats and Greens could almost muster a majority necessary for a governing coalition.

Forsa head Manfred Güllner told Stern that Merkel’s coalition wasn’t profiting from the positive economic reports because people understand that the country remains heavily indebted. Germans are also sceptical over whether the recovery will continue.

“The people know that politics can’t just turn a lever, and then the economy is good or bad,” he said.

Forsa questioned 2,501 representative Germans between July 26 and 30 to reach the poll results.