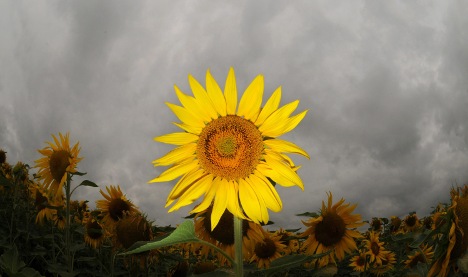 Though the week will be a little gloomier than those that came before it, temperatures will at least remain mild, DWD meteorologist Bernhard Anger said in a statement.

A front moving in from the northwest will bring storms over the next day or two – the brunt of which will be borne by Bavaria.

“The cold front of a low pressure system over Scandinavia will pass slowly over Germany from the northwest to the southeast and replace the sometimes damp but warmer air which lies over the south and east.

“This front is associated with storms. The storms will be concentrated on Monday night in the north and south, while the storm activity will be only mild in central Germany.”

Southeast Bavaria in particular will suffer storms – sometimes strong ones – on Monday with heavy, long-lasting downpours.

In much of the rest of the country, the weather will be changeable on Monday, shifting between cloud and occasional sunshine. Showers and storms will become increasingly common over the course of the afternoon.

Temperatures will range from 21 degrees Celsius in the northwest to 29 degrees in the southeast. Gentle to moderate breezes will blow from the west.

Storms will continue overnight, particularly in the southeast, while other parts of the country experience only light cloud or even clear skies.

Overnight temperatures will range from 13 to 17 degrees.

Tuesday will remain changeable, with heavy cloud in the south and east, and with stormy showers falling on Bavaria.

The rest of the country will see changeable, cloudy conditions with only isolated showers and maximum temperatures between 20 and 24 degrees.

The rain will gradually subside in the south overnight Tuesday, leaving mostly clear skies, but clouds will develop in the northwest. Overnight lows will range from 11 to 16 degrees.

Heavy clouds will rule the skies on Thursday in southern and eastern regions. Rain will persist at the edges of the Alps. Otherwise, the clouds will be changeable with intermittent showers and storms and high temperatures will range from 19 to 24 degrees.