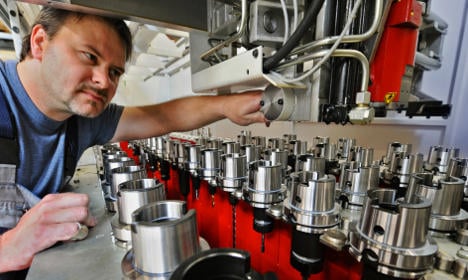 Economists agree that Germany’s export-driven economy, which relies heavily on skilled workers such as engineers to develop its high-end manufactured goods to sell overseas, will be gradually eroded in years to come by a dearth of such qualified professionals.

But on Monday Merkel’s deputy spokesperson Cristoph Steegmans said that new rules put into place in January 29 were already having a positive effect on the situation, making Brüderle’s new proposal unnecessary.

That law had changed the minimum yearly income level for skilled workers from €86,400 to €63,600. According to Steegmans, Merkel believes this rule should be readdressed first.

The comments from the spokesperson followed those from Frank Jürgen Weise, head of the Federal Employment Agency, who also spoke against Brüderle’s plan, telling daily Financial Times Deutschland that the country should look inwards for solutions to the shrinking workforce.

“The existing potential in country should be used first,” he told the paper. “We can’t allow people to remain unemployed only because their talents aren’t being used.”

Brüderle’s plan should only be a second option, he added.

“Those who want to have and keep qualified employees must offer something – and the companies can decide on that themselves,” he said, adding that one important option would be providing much-needed child care for the many skilled women in Germany.

But the Association of German Engineers (VDI) welcomed Brüderle’s idea.

“The skilled labour shortage will intensify due to demographic developments, particularly in the engineering sector,” director Willi Fuchs said, adding that currently there are some 36,000 unfilled engineering jobs.