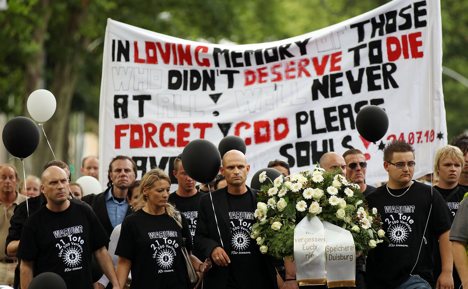 Chancellor Angela Merkel and President Christian Wulff were among several hundred mourners in a church service beamed onto big screens in and around Duisburg’s football stadium.

A large black cross several metres high was set up on the pitch. Many of those in the stadium wore black and had tears in their eyes. The solemn ceremony was also carried live on television.

Before the service, church bells rang mournfully out across the industrial western city of half a million people. Flags were lowered to half-mast, both in Duisburg and across the whole of a shocked Germany.

“I was there, working as a helper and saw it all happen. A friend of mine was hurt,” Markus Spanke, aged around 20, told news agency AFP in the stadium. “I will never forget it.”

“We were at the Love Parade, we saw everything from the bridge. We can’t shake those images of panic from our heads,” said Phil Napeirala, 21, from nearby Essen.

Later on Saturday a march was due to take place from Duisburg train station towards the narrow tunnel that served as the only entrance to the grounds hosting the techno music festival. Reports said 20,000 people were expected.

It was in this lethally packed bottleneck of a tunnel, now a solemn sea of candles, flowers and photos, that the victims died as revellers desperately tried to escape.

The dead included seven foreigners, from Australia, Italy, the Netherlands, China, Bosnia and Spain, who had come for one of Europe’s top techno events. More than 500 people were hurt, 25 of whom are reportedly still in hospital.

One man absent from public view however was Adolf Sauerland, the mayor, who has come under intense pressure to resign amid accusations that he ignored warnings that the event was a disaster waiting to happen.

An interim police report on Wednesday also put the blame on Love Parade organizers, listing a catalogue of catastrophic mistakes in managing the crowd of hundreds of thousands. Prosecutors have opened an investigation.

The grounds opened nearly two hours late, leading to an initial blockage in the tunnel, Dieter Wehe, chief of police in the state of North Rhine-Westphalia, said as he presented the preliminary findings.

When the scale of the crush became clear, police ordered stewards to close the heaving access points but this order was not carried out, Wehe said, fighting back tears at a news conference.

“It’s going to take a long time before Duisburg can get back to normal,” Reiner, a mourner at the football stadium, told AFP.