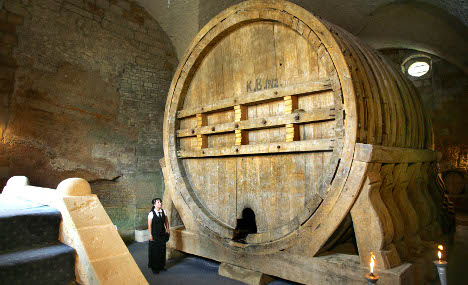 The oak barrel in the town of Halberstadt measures five metres in diameter and holds about 144,000 litres of wine. Even empty, it weighs about 63 tonnes. Guiness World Records calls it the oldest giant wine cask in the world.

On Friday local restaurateur Chris Schöne will crack the seal and serve red wine to a massive gathering including the Danish ambassador and a descendant of Lord Ludwig von Spiegel, who rescued the cask from decay in the 18th century.

Craftsmen in the nearby town of Gröningen took two years to build the cask, finishing in 1594. It was filled the same year in time for the wedding of the Duke of Brunswick, Heinrich Julius, to Princess Elisabeth of Denmark.

It took them 12 years to drink the cask dry, after which it fell into neglect. In a letter to Fredrick the Great, the Halberstadt Lord Ludwig von Spiegel asked if he might shift the barrel to his hunting lodge – a request that was granted.

In 1781, it was placed into a specially built cellar in the nobleman’s hunting lodge.

This time, however, it won’t be filled to bursting – only topped up with 4,000 litres of Dornfelder red wine from the Rhineland-Palatinate.

Restaurateur Schöne, 28, said a lack of sponsors had until now meant the cask had sat empty for more than 400 years.

“I had the idea long time ago, it just kept lacking a spark to get the thing lit,” he said.

He finally found a winemaker. Tourism authorities in Halberstadt also saw an opportunity.

“The wine barrel may get many more visitors interested,” said Doris Rünzel, who is in charge of organising a three-day festival in the town to mark the re-opening of the cask.

Despite the massive quantity of booze, she promised a peaceful celebration.

“The artists chosen are for a contemplative and harmonious approach, for which the town justly known,” she said.