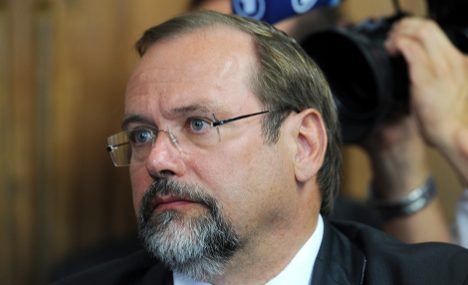 “The Duisburg mayor and those responsible in the city leadership will have to take on the political responsibility in the end,” premier Hannelore Kraft told daily Rheinische Post.

But Sauerland continued to resist calls to step down, telling daily Bild that the mayor’s job was not to give clearance for such events, as some have suggested. On Thursday morning, hundreds of protesters gathered outside the Duisburg city hall chanting, “Sauerland go!”

In another interview, Sauerland told the WAZ media group that he did not feel even partially responsible for the July 24 catastrophe, when overcrowding and alleged poor management by event organiser Lopavent led to the deaths of 21 people in a massive crush.

“There can only be personal responsibility when there has been wrongful engagement in the process,” he told the paper. “But this didn’t happen.”

The city administration had cleared Lopavent’s plans for the event, he said.

“Now it needs to be clarified whether the administration made mistakes or if they were falsely informed,” he said, adding that he wanted to help clarify the turn of events from his position as mayor.

But state premier Kraft told Rheinische Post Sauerland was making a false connection between stepping down and taking personal responsibility for the disaster.

“There is no connection here,” she said.

Kraft added that the mayor’s decision not to attend the memorial for the victims on Saturday was appropriate because he and his family had been threatened.

Sauerland had said he did not want “to hurt the feelings of the families and cause provocation by his presence.”

As well as demanding Sauerland’s resignation, the crowd of protesters on Thursday held placards with slogans such as, “Who is to blame?” in red letters. The crowd later observed a moment of silence for the victims. Some protesters then began a march around the city centre.