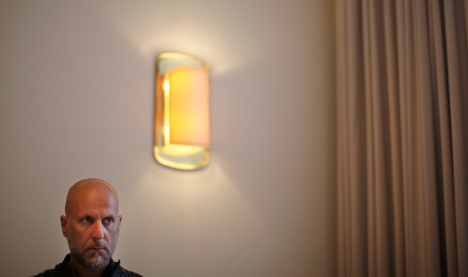 Rainer Schaller during an interview on July 26. Photo: DPA

The company was responsible for hiring private security guards to manage crowds within the closed event grounds, while some 4,000 Duisburg police officers were to ensure that people travelling through the city on their way to the festival were safe, Jäger said.

Only after the situation spiralled “out of control” did the Love Parade organisers call on police for help, according to the assessment.

State police inspector Dieter Wehe said that the number of security personnel at the tunnel entrance to the main festival area, located at a disused rail yard, had been “insufficient.” Currently it is unknown whether the 4,000 personnel promised by Lopavent were actually on hand, he said.

Lopavent’s plan provided for possible jams at the tunnel – the event’s only entrance – to be cleared by closing entry gates and sending event representatives to lead groups ahead.

This was “obviously not fulfilled,” Wehe said.

At 3:30 pm Love Parade organisers called on police for help, after which a chain of event representatives was to be formed and the order to close the entrance was given – but the order was not followed.

At 17:02 the first death on the entry ramp was reported.

Interior minister Jäger went on to criticise the city of Duisburg as the authorising body for the festival, to which an estimated 1.4 million participants showed up – far more than the 250,000 the city planned to accommodate.

The co-operation between the responsible agencies and the police had been inadequate, he said, with police receiving the event approval documents only on the day of the festival and at their request.

Overnight the number of dead climbed to 21 when a 25-year-old woman succumbed to her injuries. Thirteen women and eight men died, and more than 500 were injured, some of whom remain in a critical condition. Post-mortem results show the victims died from having their chests crushed.

Prior to the interior minister’s press conference in Düsseldorf, Lopavent organiser Schaller, however, denied accusations his company had neglected safety procedures, pointing out that city officials had approved the plan.

“Without this official stamp, we would never have let the Love Parade go ahead,” he told daily Bild.

Schaller also rejected allegations that Lopavent pressured anyone to approve the plan and added that none of his employees to his knowledge had pressured officials either. He said there were always concerns raised with such plans.

While admitting he was not sleeping peacefully at night, knowing that “as organisers, we have a great responsibility,” Schaller said that, so far in their own investigation, his company had determined they had “fulfilled all the conditions 100 percent.”

The state prosecutor in Duisburg has announced that it is looking at possible charges of causing negligent death and negligent bodily harm.

Duisburg Mayor Adolf Sauerland, who was ultimately responsible for approving the Love Parade plans, faces serious questions of his own. Sauerland, who has been receiving death threats in the past few days, has denied being told of deep misgivings about the festival’s safety provisions from both the police and fire departments.

On Wednesday Sauerland, who is resisting calls for his resignation, said he will not attend a memorial service for the victims to be held on Saturday.

Sauerland did not want “to hurt the feelings of the families and cause provocation by his presence,” a spokesman told daily Rheinische Post. The comments were confirmed by city officials.