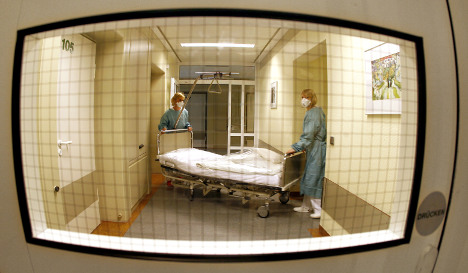 The figures from the Hospital Report 2010, released in Berlin on Tuesday by the health insurer Barmer GEK, also show that elderly Germans are having hip and knee replacements in record numbers.

Depressive disturbances accounted for 511 days in hospital per 10,000 people, followed by schizophrenia with 504 days and depressive episodes with 496 days. Part of the reason they rank so highly is that each sufferer tends to spend a long time in hospital – at least 30 days on average for all of those illnesses.

By comparison, childbirth, which came in as the number four reason for hospitalisation, kept women in hospital for an average of just 4.7 days, amounting to a total of 335 days per 10,000 people.

Mental illness is bucking the trend of shorter hospital stays. Since 1990, the average time a patients spends in a hospital bed with a mental illness has risen 54 percent, the report says.

Psychological disturbances due to alcohol were the fifth most common reason for hospitalisations, with 334 days per 10,000 people.

“If the trend continues, soon nearly every pensioner aged 60 to 65 will have a new knee or hip,” said the deputy head of the health insurer, Rolf-Ulrich Schlenker.