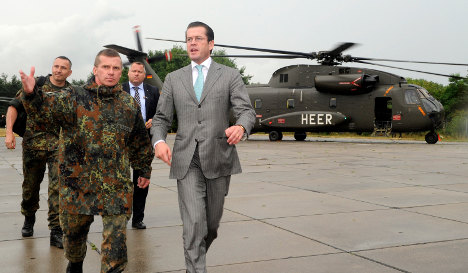 Defence Minister Karl-Theodor zu Guttenberg told broadcaster ZDF on Tuesday that all information about operations – covert or otherwise – was routinely passed on to the opposition parties.

Among other things, the documents published this week by Wikileaks revealed in extraordinary detail the activities of the shadowy US unit “Task Force 373,” which is charged with the job of capturing or even killing – without trial – Taliban leaders and terrorists.

They show that Task Force 373 has operated in areas of northern Afghanistan for which the Bundeswehr is responsible.

Green MP Hans-Christian Ströbele told the Neue Presse newspaper on Tuesday that he wanted “to read about exactly what the Bundeswehr is doing in Afghanistan.”

Ströbele, who is also a member of the parliamentary oversight group for the secret services, said he had been striving for six months to find out what secret commando missions the Bundeswehr was supporting, “and what in particular the operations team TF 47 of the Bundeswehr is doing there.”

“Task Force 47” is a crack commando squad of the Bundeswehr.

Guttenberg said the opposition parties in the Bundestag were regularly informed about the activities of the Task Force 373 in German-controlled areas and advised representatives at such briefings to pay more attention.

People briefed on the issues, including journalists, had been aware for years of the existence of US crack forces that concentrated on neutralising leading Taliban commanders and terrorists, Guttenberg said.

Guttenberg said he had made the harsh reality of the Afghanistan mission clear by describing it as a “war,” a word the government had tried to avoid for years.

In the past, the image of the Afghan war had been softened but this had to change, he said. Whether the publication of more than 90,000 classified documents would imperil Germany’s national security still needed to be examined, he added.