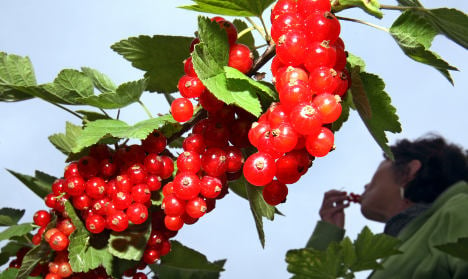 In a similar study in 2006 only three pesticides were found per sample.

While the amount of pesticide did not in some cases exceed amounts allowed by agricultural regulations, Greenpeace said the number of different chemicals combined to create a problem.

“The sum does it,” a spokesperson said.

Some of the chemicals act as carcinogens, nerve poison or damage reproductive and hormone cycles, the organisation said, encouraging Germany to better protect its consumers with new regulations to cap the number of pesticides allowed to be used on produce.

“We request the federal government to institute a national action programme for pesticide reduction with clear goals and steps,” the party’s spokesperson for nutrition policy Ulrike Höfken said. “For testing we need collective high values and standards of toxicological measurements for how they interact.”

But those who buy organic products have nothing to worry about, the organic currants were “residue-free,” Greenpeace said.

The organisation tested 31 samples of both currants and raspberries from several German cities in early July. All 13 conventionally grown currant samples came from German farms, mainly in the state of Baden-Württemberg. Meanwhile the raspberries had traces of only two pesticides on average at levels below the legal limit.