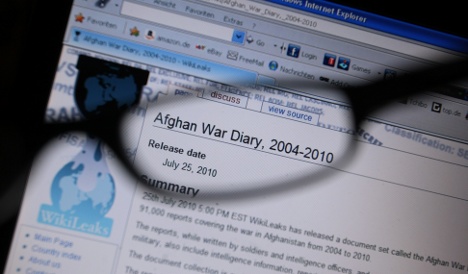 According to news magazine Der Spiegel which, along with US paper The New York Times and British daily The Guardian, has examined the documents, the files reveal “a German military that stumbled into the (Afghan) conflict with great naiveté.”

The Bundeswehr believed that the northern provinces where its soldiers were stationed would remain more peaceful than other parts of the country, the magazine reported.

On Monday Defence Ministry spokesman Christian Dienst played down the impression given by some of the documents that Washington was frustrated by the performance of Germany’s 4,600 troops in northern Afghanistan.

“Our co-operation with our American allies is excellent and we complement each other with mutual respect,” Dienst said. “This co-operation has further improved noticeably in recent months.”

The government condemned Wikileaks’ release of the documents and vowed to carefully scrutinise them to see if they endangered Germany’s security interests.

“Obtaining and releasing documents, some of them secret, on such a scale is a highly questionable practice since it could affect the national security of NATO allies and the whole NATO mission,” Dienst said.

“We are examining the countless documents to see if our security interests could also be affected.”

At the same time, Foreign Minister Guido Westerwelle said that claims in the documents that Iran and Pakistan were giving secret aid to the Taliban insurgency in Afghanistan should be carefully examined.

“We have to examine what new information there could be” within the thousands of secret files, Westerwelle said on the sidelines of talks with his EU counterparts.

Westerwelle said the documents, which also contain claims of concealed civilian casualties, had given him “comfort in my position, which consisted of never talking up the situation in Afghanistan, which is exceptionally serious.”

Germany currently has 4,400 troops there. Some 92,000 documents dating back to 2004 documented the deaths of innocent civilians, how Pakistan’s spy agency allowed its agents to meet with the Taliban and how Iran secretly furnished it with money, arms and training.

The leaks prompted a furious reaction from the White House, saying they put the lives of soldiers at risk. The documents also reveal details of clandestine US Special Forces activity in German-controlled parts of Afghanistan.

Omid Nouripour, the security spokesman for the environmentalist Greens, told Der Spiegel: “On our reading of the US documents, it is disturbing how little the federal government has informed the parliament about the activities of American special forces in German areas. We demand an immediate explanation from the federal government as to what they know about the missions. We will push with all force for answers.”