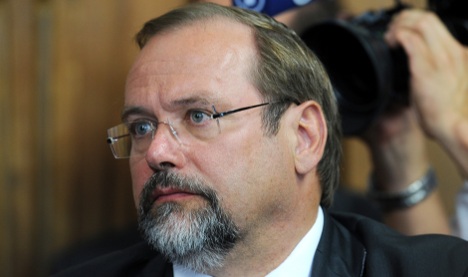 Authorities had reportedly been warned the western industrial city was too small to hold one of Europe’s biggest techno music festivals, while security arrangements have been slammed as woefully inadequate.

Scrutiny quickly focused on Mayor Adolf Sauerland. But Sauerland, while admitting he understood why people were angry with him, said he would stay in the job.

”Today and in the coming days it has to be about working through the terrible event and putting the pieces of the puzzle together into an overall picture,” he said.

Sauerland also earned widespread scorn for saying on Sunday that the safety plan for the festival had been ”solid.”

He was also reportedly pelted with rubbish.

“The cynical reaction of the mayor, who said the victims’ behaviour was partly to blame, was unacceptable,” wrote daily Neue Rhein Zeitung in an editorial. “His scandalous position was nothing less than a mockery of the dead – of young people who came from afar to party and who died because of your overburdened organisation.”

Monday’s edition of the daily Stadt-Anzeiger in nearby Cologne said Sauerland had been warned in writing in October 2009 that the grounds were too narrow for the expected crowds but that the concerns went unheeded.

Meanwhile news magazine Der Spiegel said that the festival only had authorisation for 250,000 revellers instead of for 1.4 million people who organisers said had attended.