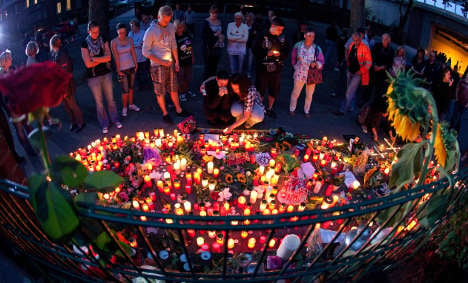 News magazine Der Spiegel cited a document from local authorities which revealed that Saturday’s Love Parade in the western city of Duisburg could not accommodate any more people because of insufficient fire and safety measures.

Allegations have also been made that the authorities had been warned that Duisburg was not suitable for such an event, one of the largest of its kind in Europe.

Prosecutors launched an investigation on Sunday.

The deaths occurred as panic broke out in a tunnel packed full of people that served as the only entrance to the festival grounds, police said. More than 340 people were injured.

Flags in the mourning German city flew at half mast Monday as investigators continued probing allegations over the lax safety measures.

On Sunday deputy police chief Detlef von Schmeling said the victims, aged between 20 and 40, died as they scrambled to escape from a crush in a narrow, 100-metre tunnel that served as the only entrance.

Television pictures showed lifeless bodies being passed over the heads of those frantically trying to escape.

“I saw dead people in the tunnel, others alive but unconscious on the ground,” said Anneke Kuypers, an 18-year-old from New Zealand. “Others were crying.”

German-born Pope Benedict XVI and Chancellor Angela Merkel expressed their horror over the catastrophe, as the German leader called for a “very intensive investigation.”

“This was a very, very dreadful and sad day,” Merkel said. “We must do everything we can to ensure that something like this never happens again.”

But shock quickly turned to anger as furious survivors demanded explanations for why security plans could went so wrong and reports emerged that authorities had been warned beforehand that Duisburg was too small for the event.

At the entrance to the tunnel, where dozens of candles and an impromptu remembrance board with hundreds of signatures marked the dead, there were angry messages for the organisers.

“This event should never have taken place here,” read one. “You should be ashamed of yourselves,” another message read.

Monday’s edition of the daily Stadt-Anzeiger in nearby Cologne said the mayor had been warned in writing in October 2009 that the grounds were too narrow for the expected crowds but that their concerns went unheeded.

The mayor, Adolf Sauerland, said the investigation had been passed to prosecutors but defended what he said was a “solid security plan.”

“I know that everyone wants an answer to the question ‘why?’ and this must be cleared up. But I ask for people not to jump to premature judgements,” Sauerland told angry reporters at a charged news conference.

Germany’s police union chief, Rainer Wendt, also attacked the planning, telling daily Bild: “At the end of the day, the city and the organisers are to blame for this tragedy.”

“I warned one year ago that Duisburg was not a suitable place for the Love Parade. The city is too small and narrow for such events,” Wendt said.

With several questions still unanswered, one thing was clear: the tragedy of the 2010 Love Parade will not be repeated.

Chief organiser Rainer Schaller said the popular event, one of the biggest techno festivals in Europe, would not be held again “out of respect for the victims and their families.”

First hosted in Berlin in 1989 just months before the fall of the Wall, the Love Parade left the capital in 2007 after disagreements with city authorities over logistics and security and has since been held in several other German cities.