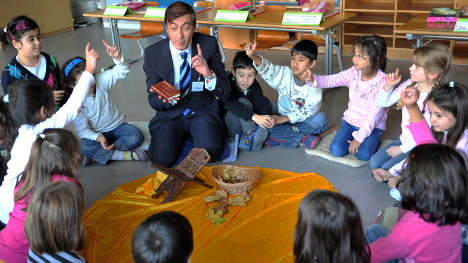 An Islam lesson at a Munich primary school. Photo: DPA

She said learning lessons about Islam had been very constructive in schools, leading to better understanding between Muslim and non-Muslim students.

“Of course I know about the fears of many Germans in connection with this topic,” she told Focus magazine. “But I see it as experienced religious freedom, as a dialogue between Christianity and Islam.”

She said there was no way such lessons were about installing Koran schools, or offering a platform to radical Islamists.

“No, we want to use this to bring Islam out of the back yard and make it transparent,” she said.

Schavan first introduced Islam lessons in Baden-Württemberg when she was culture minister.

“My experience was very positive,” she said. “The acceptance of Muslims by Germans clearly increased. This was also to do with the fact that the lessons were held in German and no secret was made about it.”

She also supported the idea of university courses in Islamic studies.

“We will soon be educating Imams at German universities, who will then work in mosques as preachers. We need leaders there who have learned about their religion scientifically and thus also critically,” she said.

The minister also said that Islamic communities in Germany should understand themselves as part of German society.

“So, no isolation, rather the greatest possible level of transparency. Only in this way can prejudices be reduced,” she said.

Yet Schavan was critical of burkas, saying they made integration much more difficult.

“Is the burka an expression of self-determination or rather much more the expression of a fundamentalist attitude? I find clothes should not make a person impossible to recognise. Fear and uncertainty comes from such things,” she said.