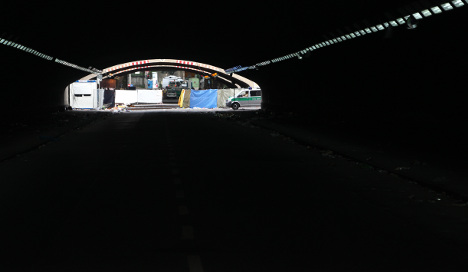 Police and investigators in the tunnel. Photo: DPA

Visibly disturbed, Schaller said in view of the disaster in which 19 people died and hundreds were injured on Saturday, there would be no more Love Parades “out of respect for the victims and their families.”

He was joined at the hour-long press conference by representatives of the Duisburg police and the city administration, as well as the crisis team set up on Saturday to manage the aftermath of the disaster.

None of the 16 who died on the scene were found in the entry tunnel, said Detlef von Schmeling, from the police. He said they were all on the west side of the entry ramp which leaves the tunnel itself, and all but two were on the metal stairs up away from the tunnel.

He said 16 bodies had been identified, and relatives or consulates had been informed of their deaths. All of those identified were German apart from seven foreigners from Australia, Italy, the Netherlands, China, Bosnia and Spain.

They were aged between early 20s and late 30s, he said.

A criminal investigation has been launched, which meant that Adolf Sauerland, Duisburg mayor, as well as Schmeling, could not answer many of the questions posed by journalists at the conference.

The Duisburg prosecutor later confirmed that an investigation into negligent manslaughter has been launched, although it remains open who might be accused. Papers relating to the security operation were seized from organisers as well as city officials on Saturday.

Schmeling said he could not confirm the reported numbers of people at the parade or in the final party area. He said the only numbers he could be certain of were those who took trains to the parade, some 105,000.

He said the final party area was never full, that pictures taken from helicopters during the day showed there was always additional space there.

Media reports put the number of visitors at around 1.4 million, while Schmeling said the final party area was big enough to hold a maximum of 250,000 or up to 350,000 people.

Organiser Schaller would not answer questions from journalists as to why his team had said in advance of the party that around a million people were expected, yet there was only one tunnel entrance to the final party area which could not accommodate even half that many people.

He said such matters were part of the investigation and he could not comment.

Der Spiegel magazine reported on Sunday that the police and fire brigade in Duisburg had developed a different safety concept for the Love Parade, but that this had been rejected by city authorities.

This alternative concept would have brought the ravers into the final party area in a different, broader fashion, avoiding the bottleneck situation which developed around the entrance tunnel.

But that plan would have needed significantly more personnel and was rejected by the city.

At least one fire fighter has launched a criminal complaint saying he had warned organisers of exactly what happened, according to the Neue Ruhr/Neue Rhein Zeitung newspaper.

The police trade union has also said its members had misgivings about the organisation of the event. Wolfgang Orscheschek, deputy of the union in North Rhine-Westphalia said the area set aside for the final party was much too small and that those who died were, “victims of material interests.”

He said Love Parade organisers had pushed city officials into a corner so that they agreed to things despite urgent warnings about safety.