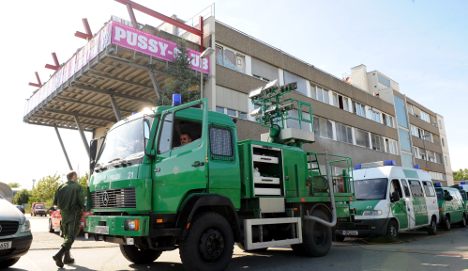 The ‘Pussy Club’ chain of brothels, based in Stuttgart, Wuppertal, Heidelberg and Schönefeld just outside Berlin, attracted intense attention when the owners started offering the ‘flat rate’ deal.

Customers were offered ‘sex with all the women, as long as you want, as often as you want and how you want’ for a one-off payment of €70 or €100 a day.

Much of the country’s media were simply titillated by the idea, but the business model also sparked a debate about human dignity.

It also attracted official attention, and then an investigation into the circumstances under which the women, most of whom did not have work permits, had come to work there.

Six people involved in running the clubs were arrested and charged with human trafficking.

The verdict handed down on Friday by the Stuttgart District Court surprised many observers – the 27-year-old woman who was the titular head of the brothels was given three years in prison.

They admitted to fraud concerning €2.7 million social security payments that had not been made – the prostitutes had been fraudulently registered as self-employed. Because they were obviously not self-employed, their employers should have been paying social security for them.

The original charges of human trafficking were dropped against the 26-year-old who was described as a front woman, only owning the brothels on paper. The other two main defendants remain charged with human trafficking in other cases.

Judge Andreas Arndt said in his sentencing speech that the prostitutes were not being threatened with violence, nor forced to work there, as had been alleged. He also said it was not for the court to decide whether the flat rate sex offer was an offence against human dignity.

Raids on the brothels at the end of last July resulted in those in Heidelberg and Stuttgart being closed because of poor hygiene standards, while the one in Wuppertal has also been closed down.

Prosecutors in Stuttgart are investigating 32 men accused of human trafficking, who have been arrested in Germany, Spain and Romania and are thought to be the driving force behind the chain of brothels.