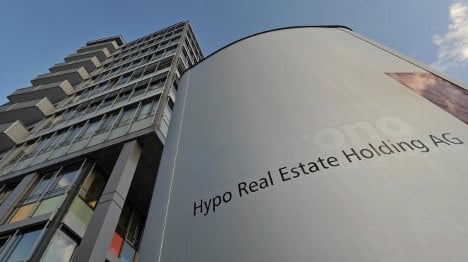 “HRE is the only German bank to fall short of the six percent tier 1 capital ratio in the most severe stress scenario,” a joint statement issued by the German central bank and financial sector stabilization fund SoFFin said.

The test’s key indicator, tier 1 capital is core bank reserves that cover the risk of depositors demanding their money back and rendering a bank insolvent.

Tests required banks to maintain a ratio of at least six percent of tier 1 capital, to total assets such as loans or investments in sovereign bonds, even if hit by shocks like a severe recession coupled with widespread defaults.

“Measured by this criterion, the German banking system has shown itself to be robust and proved its resilience even under very pessimistic assumptions,” the statement said.

The number of German banks checked was the second largest contingent after 27 in Spain.

HRE took the news in stride, issuing a statement saying, “It should be noted that the stress testing outcomes for 2011 have limited relevance for the group,” since it has already begun taking corrective measures.

Munich-based HRE and regional state-owned Landesbanken were believed to face the highest risks among banks at the heart of Europe’s biggest economy, while no investors feared problems at giant Deutsche Bank or number two Commerzbank.

Even Postbank, which has the country’s biggest retail network and over which some had placed a question mark, passed with a 6.6 percent ratio in the worst-case, a so-called adverse economic scenario to which was added the shock of a crisis in sovereign debt.

HRE earned a failing grade of 5.3 percent in the adverse scenario, which assumed Germany would fall into deep recession, and 4.7 percent in the worst case.

Steps are already underway to restructure HRE, which was nationalised last year following a long flirt with bankruptcy.

The lender has already said it needs another €2 billion in fresh capital, which it can easily obtain from its new owner, which is SoFFin.

The fund had €255 billion in loan guarantees and more than €50 billion in capital standing by to help out German banks that might come up short in the tests.

HRE has already received €7.85 billion in cash from SoFFin along with €103.5 billion in loan guarantees.

At the end of March, the bank had around €39 billion in exposure to sovereign debt from weaker eurozone countries like Greece, Ireland, Italy, Portugal and Spain where bonds have all been under pressure.

The SoFFin statement said plans are in effect to transfer €210 billion in “risk positions” to a “deconsolidated ennvironment” – otherwise known as a “bad bank” – a move that will dress HRE’s windows up nicely.

The stress tests of 91 European banks, which account for 65 percent of the continent’s banking sector, were aimed at restoring investor confidence in the same way as similar US tests did in early 2009.

Much will depend now on the market’s reaction to test criteria, which did not explicitly allow for the possibility of default by a weakened eurozone country such as Greece.

The tests, conducted by the London-based Committee of European Banking Supervisors, do however provide investors with information they would need to calculate a bank’s full exposure to sovereign debt by themselves.

But as Goldman Sachs economist Nick Kujocharov noted, “If too many banks pass and do so with a comfortable margin, the test may be judged as too easy.”